Interactions between nineteenth century Wabanaki, Haudenosaunee and Euro Americans influenced the arts of Native America and prompted innovative changes, including creative innovations in fashion that appealed to Victorian sensibilities. Native imaginations were spurred by the emerging tourist economy that developed in the early nineteenth century around Niagara Falls and the tribes nearest the Falls, such as the Tuscarora and the Seneca, developed a wide range of items which they sold to area travelers. These ideas spread quickly throughout the northeast by way of long standing intertribal trading networks that had been in place for centuries.
During this period both the Haudenosaunee and Wabanaki developed a number of hat styles that captivated both Victorian men and women. Of these the Glengarry cap or bonnet, which was derived from traditional Scottish Highland dress, was perhaps the most popular design. Art historian Ruth Phillips wrote that this style “illustrated yet another type of inter-cultural configuration. Here the overall form is derived from a European rather than a Native prototype, one made familiar by military uniforms worn by British soldiers in Canada. By dressing her sons up in Scottish costume in the 1850s, Queen Victoria started a fashion for Glengarrys as children’s wear in Britain and the colonies” (Phillips 1990:29).
It’s certainly an oversimplification to think of this material simply as “tourist art” because these items were used by Native people as well.
Charles E. Hanson wrote that “[t]he Glengarry was enthusiastically adopted by many Highlanders about 1800 to supplant the traditional flat blue bonnet. It was a compact and comfortable piece of head gear, its dark blue color enlivened by hanging ribbons at the back and a bright red pom-pom on the top. Glengarry bonnets were just as popular among the traders [as] their employers… Thousands of Glengarries were also purchased and worn by the Indians of southern Canada and the Great Lakes region. No doubt they received varying degrees of embellishment with ribbon work, colored quills and beads…” (Hanson 1977:7).
Hudson Bay Company trade ledgers indicate that large quantities of these hats were imported for the Indian trade. Iroquois and Wabanaki craftswomen transformed many of these into colorful items that were richly embroidered with beads, moosehair and ribbon work and they were quite popular in the second and third quarters of the nineteenth century. 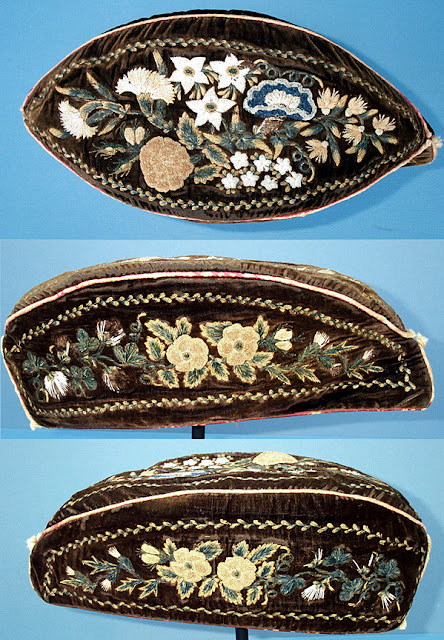 This first Glengarry (10.5 inches long y 5.3 inches wide) is decorated with dyed moosehair. It’s embroidered on brown velvet and has a red silk cord edge trim and a red silk lining. It is very similar to one featured in Pleasing the Spirits by Douglas C. Ewing (next image) that is identified as Huron, circa 1820. Private collection. 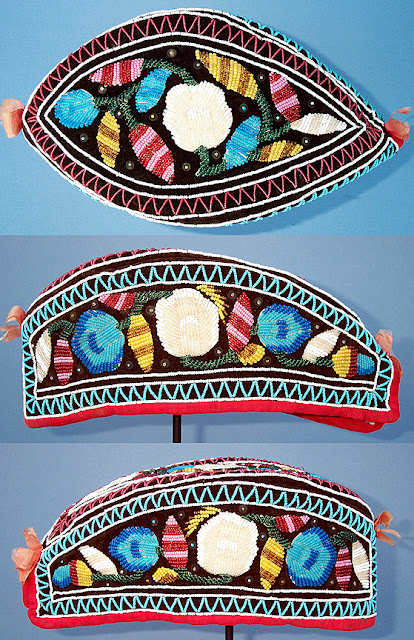 This mid-nineteenth Iroquois Glengarry hat is in the classic Niagara Floral style, with large, ovate flowers and long, thick stems. This example has an 1852 date on the inside. Private collection. 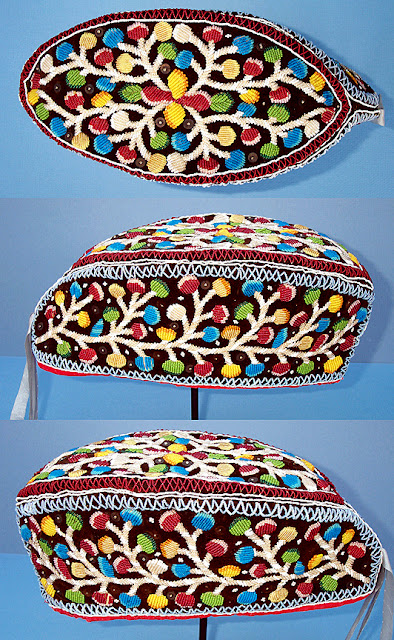 Another classic example of a Iroquois Glengarry. This extravagantly beaded example, with a symmetrical design on the top, is composed of smaller flowers than the previous example. The treatment of the flowers and stems is similar to those on a bag in Brooklyn Children's Museum that is dated 1849. Private collection. 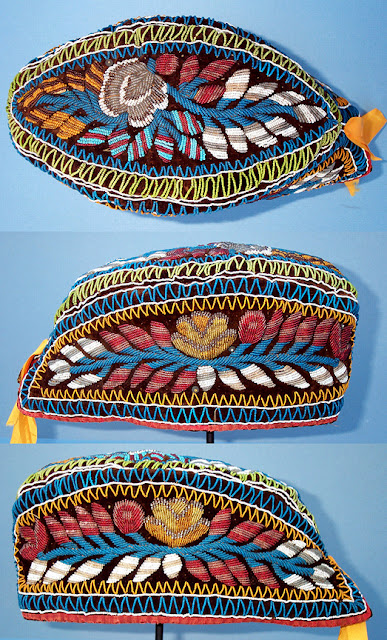 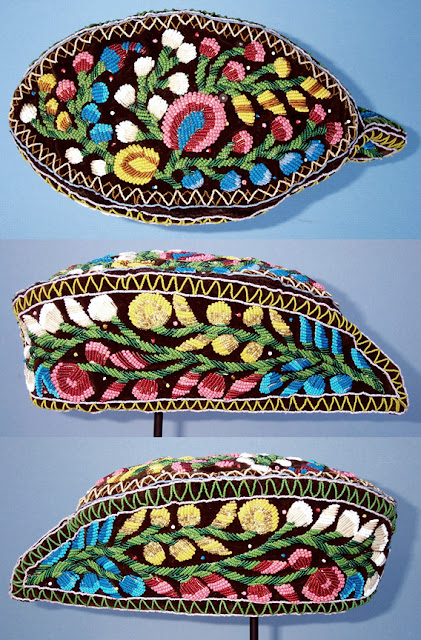 The very long stems on these hats is an early feature seen exclusively on Iroquois work. As time progressed, the stems got shorter and the flower designs became more abstract in their form. By the 1860s, the recognizable floral forms of the 1840s and 1850s had all but  disappeared. Private collection. 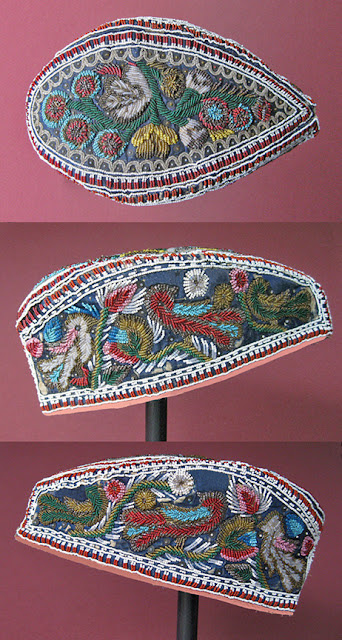 This example is somewhat earlier than the examples above. The curvilinear or celestial dome motif along the perimeter of the top panel is similar to that on a beaded bag  the collection of the Canadian Museum of Civilization, Hull, Quebec, #111-1-1176. The bag in the CMC was collected locally in 1841. This example has a silk ribbon edge binding (usually an early dating marker) and the side panels each have three beaded birds. Private collection. 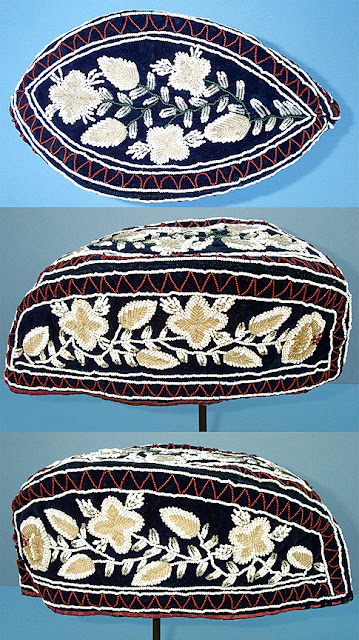 Another early example of an Iroquois Glengarry. This one is beaded on a Navy blue velvet and has a red silk ribbon edge trim. (1830s-1840s). Private collection. 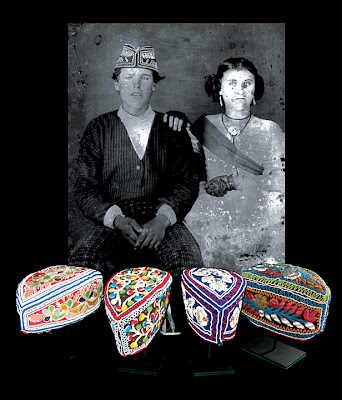 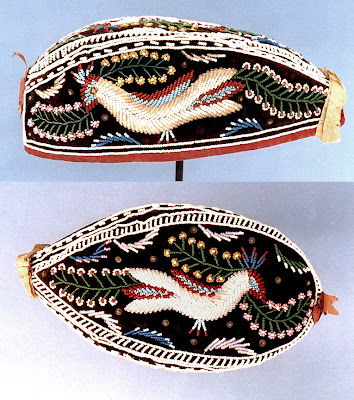 Mid-nineteenth century Iroquois Glengarry with a beaded bird.  Some contemporary Tuscarora beadworkers refer to these beaded birds as Carolina parakeets, the extinct birds that once lived in their North Carolina homeland before moving north. A similar example in the Rochester Museum and Science Center (Item number: 94.57.1)   came with an old note indicating it was collected at the Tonawanda (Seneca) Reservation in Western, New York. Private collection. 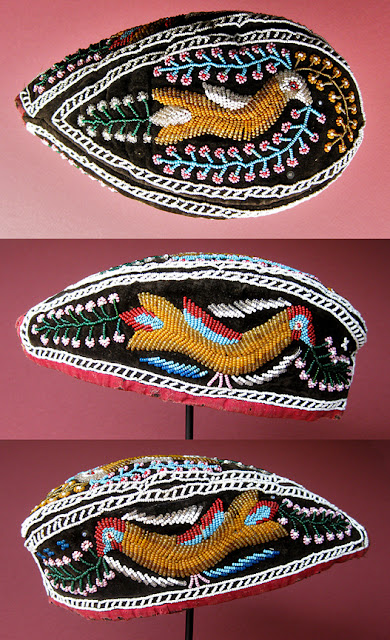 Another nice example of an Iroquois Glengarry hat with a bird motif. Mid-nineteenth century. Private collection. 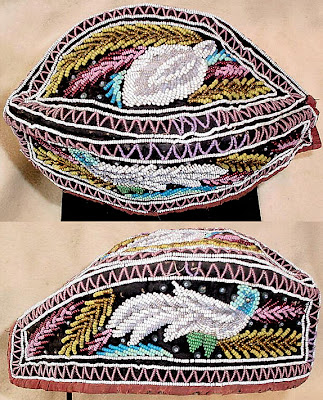 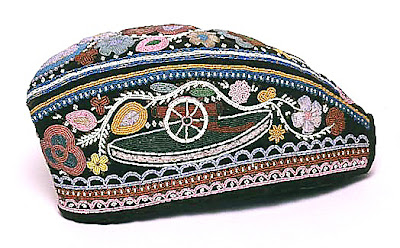 Wabanaki examples of Glengarry hats are not as common as the Iroquois examples. This Wabanaki Glengarry is from the collection of the Maine State Museum. The motif on the side panel is a cannon mounted on a boat.  They don't get much better than this. Third quarter on the nineteenth century. As a general rule, designs on Wabanaki work are more symmetrical . 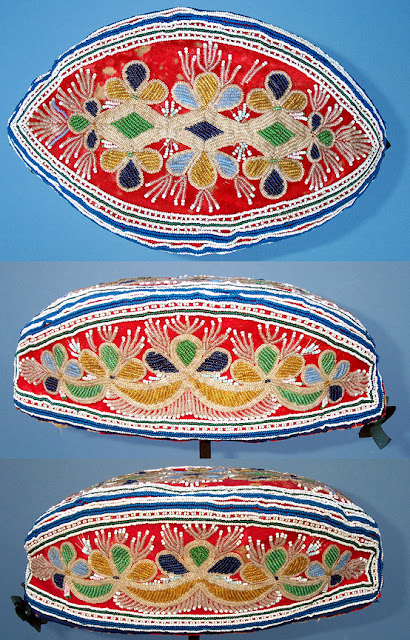 Another example of an Iroquois Glengarry. Middle of the nineteenth century. Private collection. 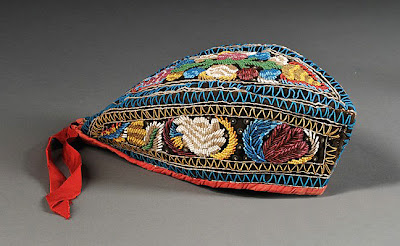 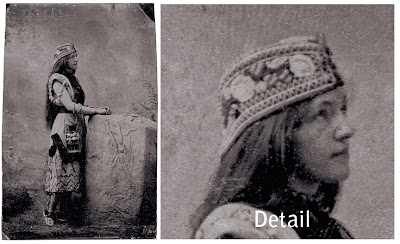 A tintype from the 1860s of a young woman wearing a classic example of an Iroquois Glengarry in the Niagara floral style. Private collection. 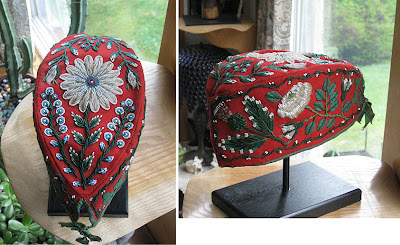 Another example of an Iroquois Glengarry but in a different style from any of the previous ones. The shape of the flower, (illustrating them in various stages of blooming) is characteristic of work that was done by Caroline Parker and her family. She was a Seneca beadworker who married Tuscarora chief John Mountpleasant. She was quite noted for her skills as a beadworker. A Google search will bring-up more information about her. This piece is circa 1850.


Some of these hats may have been designed with a specific function in mind. Style-conscious men wore formal indoor caps from the sixteenth through the late nineteenth centuries. In the mid-nineteenth century a new, soft form known as a “smoking cap” became all the rage. The shape it took was a cross between the fashionable pillbox and the Turkish fez. They were often decorated with floral imagery and were worn to prevent the hair from smelling of tobacco. 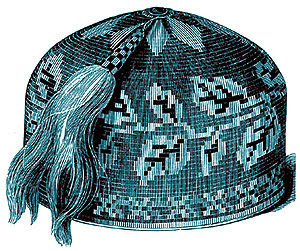 This Victorian Smoking Cap is from an 1857 edition of Godey's Lady's Book .


The online version of Victoriana Magazine reports that “[m]any of the lady’s fashion publications of the nineteenth century devoted pages to fancy designs for at home fashions for the refined Victorian gentleman – house robes, slippers, and especially smoking caps. A smoking cap or lounging cap was popular as informal gentleman’s wear from the late 1840s through the 1880s. They were originally worn to keep the head warm in drafty rooms but continued to be in style long after improvements in heating eliminated their necessity. The smoking cap was the perfect gift for a young lady to embroider for her fiance or for a wife to create for her husband.”

Besides the beaded Glengarry, other hat styles were popular with Iroquois and Wabanaki beadworkers. There was the “cap style,” a form which generally incorporated a visor, and there was what is sometimes called the “priest style,” a Turkish fez-like design which often had a band along the bottom that was decorated with a pointed diagonal pattern that extended along the circumference of the hat. 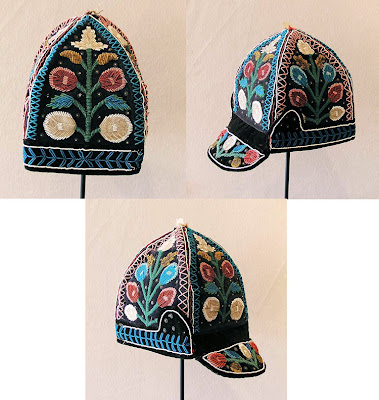 A beautiful circa 1850 example of an Iroquois cap with a visor. The floral designs are in the classic Niagara floral style. Private collection.

This mid-nineteenth century example is constructed much like the Glengarry's above. There is a top and two side panels but additionally this one has a visor. Private collection. 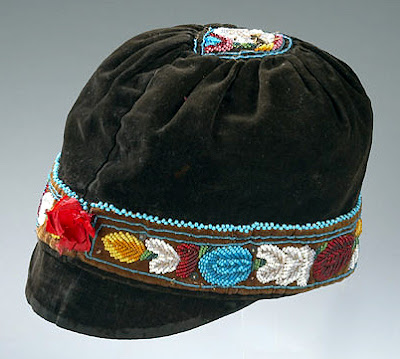 Another example of a mid-nineteenth century Iroquois cap. Private collection. 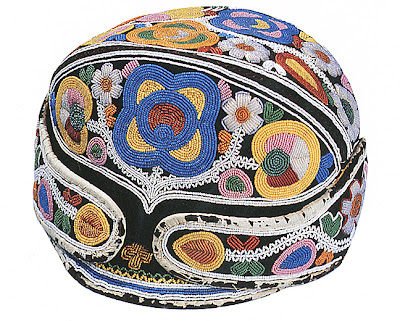 This example is Mi'kmaq. It's illustrated in Trading Identities by Ruth Phillips. In her description of this late-nineteenth century cap, professor Phillips writes: "This hat, whose horizontal tabs and vestigial brim are modeled after a Victorian sportsman's cap, was made by Mary Ann Geneace or Richibucto, New Brunswick. It's a fine example of the Mi'kmaq preference for building rich floral patterns of solid blocks of color rather than employing the zones of monochromatic shading used by Iroquois beadworkers." The hat is from the New Brunswick Museum, St. John.

This hat is similar to the previous example though the beads used are smaller than those used in the Greneace example so this hat might be a little earlier, possibly from the 1860s. Private collection.

Another fine example of a Mi'kmaq cap with a visor. Third quarter of the nineteenth century. 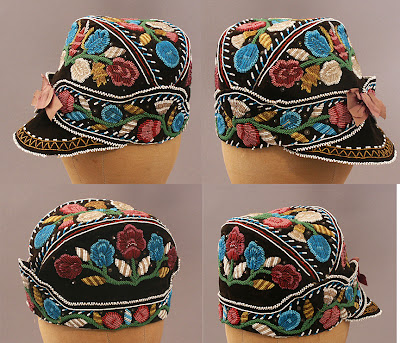 This outstanding  Iroquois example also has horizontal tabs like the Mi'kmaq examples above and it is constructed in a similar fashion. This cap is circa 1850 and at least ten to fifteen years earlier than the Mi'kmaq examples so this style may have originated with the Iroquois.


Following are several examples of both Iroquois and Wabanaki hats in what is sometimes called the "priest style." These are similar in shape to the Turkish fez smoking caps described earlier and they  often had a band along the bottom that was decorated with a pointed diagonal pattern that extended along the circumference of the hat. 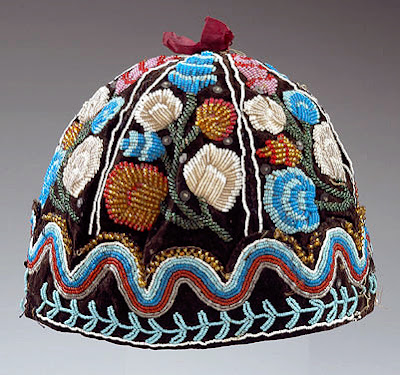 This Iroquois example in the Niagara floral style is circa 1850. Private collection. 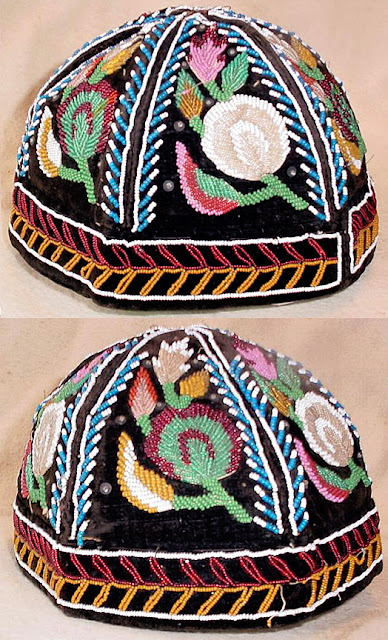 Another example from the early 1850s in the Niagara floral style. Private collection.

This six-panel Iroquois hat is beaded in the Niagara floral style. Circa 1850. Private collection.

This early (1820s-1840s) six-panel hat has three red broadcloth panels and three that are black velvet. The design in the beaded band could be a representation of the Iroquois celestial dome above the earth tree and the stylized crown on each panel suggest it could have a Canadian origin. Private collection.

Another fine example of a four-paneled Iroquois hat. The bilaterally symmetrical design in each panel suggest an early date. Possibly from the 1840s. Private collection.

The floral motifs on this example are similar to those on one of the hats above.  Possibly from the 1840s. Private collection. 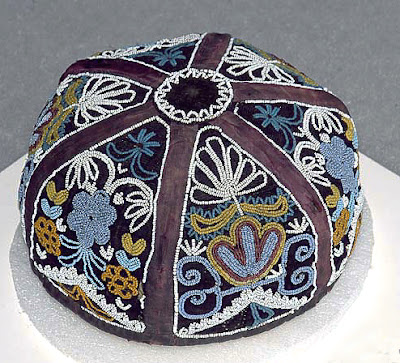 This Wabanaki example (possibly Maliseet) is from the Main State Museum collection. Third quarter of the nineteenth century. 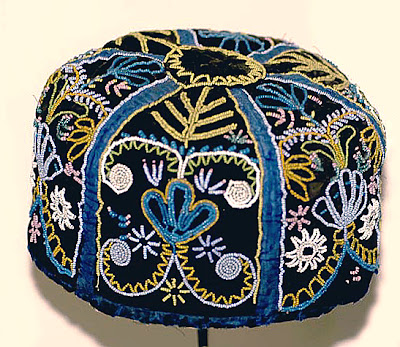 Another Wabanaki example from the Maine State Museum collection. Third quarter of the nineteenth century.

Another beautiful example of a Wabanaki hat. The leaf motifs on Wabanaki work are often depicted in the shape of a heart. On this example, the beading on the leaf motifs is a form of embossed or raised beadwork. Third quarter of the nineteenth century. Private collection. 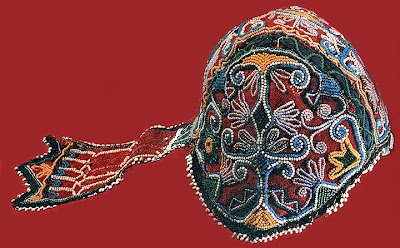 This last example is from the Peabody Essex Museum collection. It's a child cap that is attributed to the Penobscot. Mid-nineteenth century.

Trading Identities - The Souvenir in Native North American Art from the Northeast, 1700-1900. Published by University of Washington Press and McGill-Queen's University Press. 1998

Hanson, Jr., Charles E.
The Beaded Glengarry in The Museum of the Fur Trade Quarterly, Volume 13, Spring 1977, Number 1.
Posted by Iroquois and Wabanaki Beadwork at 6:09 PM