Implicit in the thinking of many native tribes is that objects have an inherent sprit or soul associated with them. When considering historic Northeast Woodland beaded bags, do we view them solely as inanimate objects made to be sold as souvenirs or, do they contain within them something more; perhaps the protective spirit or essence of the plants and other sacred designs depicted on their surface?  Aboriginal art objects are often seen in isolation but the designs on beaded bags had a specific meaning to the artists who created them. Not only did they have cultural meaning but they were also a piece of someone’s heart and soul.
There is always a risk in assigning a specific meaning to a motif, but some designs appear over and over again and are likely rooted in the culture of the Northeast Woodland people.
Notwithstanding, our appreciation of the beaded souvenir bag can be enhanced with a basic understanding of the iconography that appears on them. For more information on Iroquois beaded bags see the Made of Thunder collection.


Bags with a Heart Motif


Like the pictographic examples (to be covered in a later posting), bags incorporating a heart are uncommon.  The heart motif in Iroquois art first appeared as a metaphor on the Hiawatha (wampum) Belt, which is considered the formative record of the League of the Haudenosaunee. Each of the four squares on this belt represents the Mohawk, Seneca, Cayuga and the Oneida. The central motif symbolically represents the Onondaga, the heart of the Haudenosaunee nation.  If the heart or any of its constituent parts is harmed, all five Nations were affected.
The original meaning of the heart motif on souvenir bags is still clouded in mystery but its symbolism might be related to silver brooches that were popular with Iroquois women during the eighteenth century. “The heart shaped brooch has been called the national badge of the Iroquois because of its popularity among them. It is found in both single and double forms, often surmounted by a crown. The design is thought to have come to North America from Scotland, where it was a popular love token and betrothal symbol. The ‘Luckenbooth’ brooch, as it was known in Scotland, may have been introduced by British-trained silversmiths such as Robert Cruickshank or James Hanna. Another possibility is that the Indians requested the brooch after seeing it worn by Scottish traders and settlers” (Fredrickson and Gibb 1980:53).
Arthur Parker reports that in Europe, the earliest Luckenbooth brooches that were made in the shape of a heart were manufactured as early as the seventeenth century. “They were mostly used as luck tokens, or betrothal gifts, and the choice of the heart shape… is sufficiently obvious” (Parker 1910:354). Many were made by Iroquois silversmiths who found their inspiration in European models, and the Iroquois continued fabricating them until at least the 1860s. “Any brooch pinned to the garment of a child was regarded by the Scotch as an efficient charm against witches…When the Iroquois silversmiths copied the Scotch patterns they left off many things that were common in the original patterns and interpreted the design as their own education, environment, or customs dictated” (Parker 1911:285).
The use of silver brooches as charms to ward off evil spirits was also part of Native peoples’ pre-contact religious beliefs. Additionally, they may have also seen the heart broach as a symbol of tribal identity as they were quite popular with Iroquois women in the eighteenth century. It was believed that the metal’s luminosity, especially when used as a personal adornment, constituted a power that reflected or blocked evil spirits. Whether this is the intended significance of the heart motif on souvenir bags is unknown.
The Seneca have legends about these brooches. One relates that “…the shining ornaments are the scales of an under-water fish-man who loved a maiden and lured her to his lake each day by a gift of a scale until they became a charm that drew her into the water and to her lover” (Parker 1910:355).
In all probability, some of the designs found on early beaded bags relate to a particular dream experience known only to the beader, enhancing its transcendent nature to the maker. Since revealing the precise meaning of a vision was to forfeit some of the powers it conferred, our understanding of the significance of many traditional designs may forever be clouded in mystery.
The provenance for this exceptional piece indicates that it was once owned by Henry Wadsworth Longfellow, who gave it to a Miss Priscilla Green, of Scalby Nabs, in Yorkshire, England. Miss Green was a traveling preacher and in a reference to one of her sermons, Longfellow described her voice rising up “as if on angels’ wings.” The inside of the bag bears the date 1842. The design incorporates many areas of solid bead fill, a prominent feature on purses from the early 1840s. Earlier pieces incorporated curvilinear and geometric designs without the use of solid bead fill.
Another beautifully designed bag is decorated with a large heart motif.  The artist who created this piece used a very refined color palette in her design. The pleasing color combinations along with the curvilinear bead strings that connect the smaller hearts to the larger one are elegantly balanced within a hexagonal enclosure. The functional flap is decorated with bilaterally symmetrical strawberry leaf motifs. It’s certainly one of the masterpieces of early Haudenosaunee souvenir art.
This splendid early bag with a large heart as its focus incorporates a pair of inward turning helix curves to form the shape of the heart.  The use of the double-curve to suggest a heart may be a Haudenosaunee identity marker as I’ve seen it used this way on a number of souvenir bags. Two small sun or star motifs are placed on either side of the heart while two more flank the large sun on the flap. The organic design on the back is atypical. It could be an early representation of a floral motif, or perhaps it has a cosmic or dream-inspired genesis. 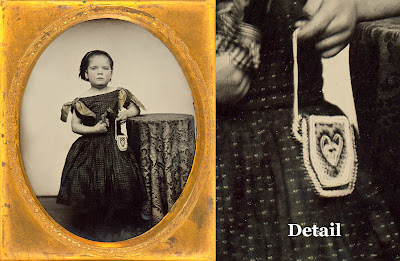 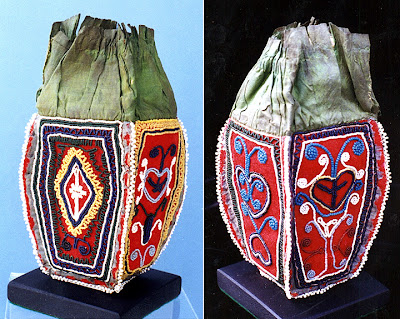 This early, four paneled, Iroquois (possibly Seneca) drawstring reticule is from the first quarter of the 19th century. It has a silk extended top and heart motifs are depicted on three of the four panels. Private collection.

The crown and shield motif on the back of this Iroquois beaded bag suggests that it possibly has a Canadian origin. 1820s-1830s.
Private collection.

This image is presumably of an Iroquois wearing an old-style bag. Although this is a circa 1907 real photo postcard, the bag pictured is made in a much earlier style. A heart is depicted on the flap and the large, tri-lobed device on the face of the bag has two helix coils flowing from the top in the form of a double-curve motif. This card is part of a series of postcards that were taken at Otsego Lake, near Cooperstown, New York. Cooperstown was named after the family of James Fennimore Cooper who used Lake Otsego and the surrounding countryside for the setting in his books. In 1907 Cooperstown held its Centennial Celebration and these postcards document an historic reenactment connected to that event.
Several other early-twentieth century images exist of Indians wearing old-style bags that appear to be newly constructed. They are generally larger than the earlier nineteenth century bags and their designs, in comparison, are efficient and economical with less complex surface ornamentation. This bag may be contemporary to the image and was possibly derived from an earlier model, to be used as a prop for this event.

This 1840s Iroquois beaded bag is done in the Parker Style. Private collection. 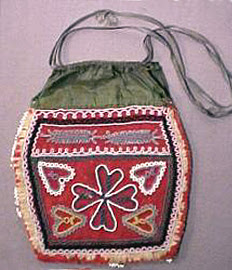 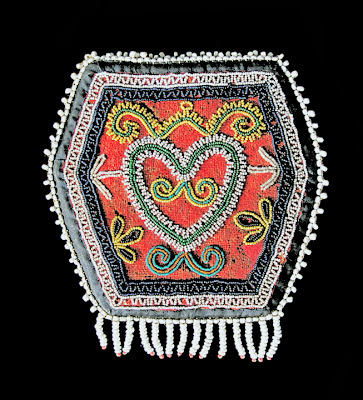 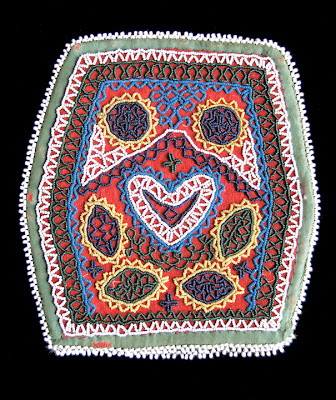 This Iroquois (possibly Seneca) beaded bag had an opening along one side that revealed an old newspaper on the inside, between the bag face and the lining that was no doubt used to stiffen the bag during construction. It was dated 1822. Private collection. 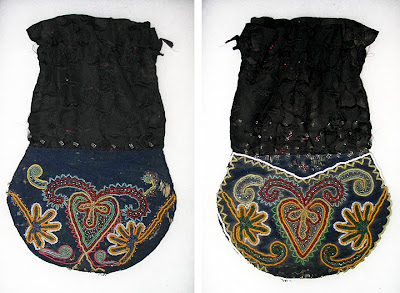 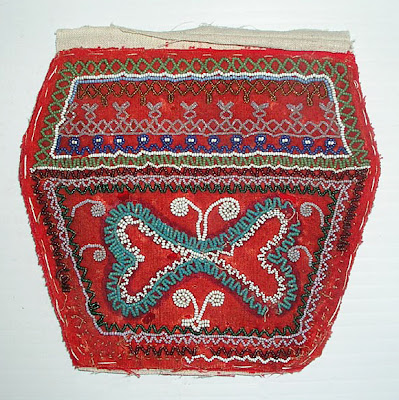 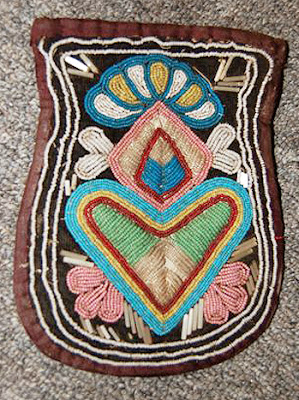 This is a Wabanaki bag in the familiar vase or inverted keyhole shape. The leaves that decorate the surface of Wabanaki bags are often depicted in the shape of a heart though it's unusual to see the heart motif as a central design feature. From the second half of the nineteenth century. Private collection.
References Cited
Fredrickson, N. Jaye and Gibb, Sandra
1980    The Covenant Chain – Indian Ceremonial and Trade Silver. A catalog to a travelling exhibition of the National Museum of Man. Published by the National Museum of Canada / Ottawa.
Parker, Arthur C.
1910    The Origin of Iroquois Silversmithing in American Anthropologist, New Series, Vo. 12, No. 3, July-September.
1911    Additional Notes on Iroquois Silversmithing in American Anthropologist, New Series, Volume 13.


Posted by Iroquois and Wabanaki Beadwork at 12:54 PM