I came across this recently and thought some of you might find it of interest. To the best of my knowledge, it's the first published report of the death of Handsome Lake, a great leader and prophet, who played a major role in reviving traditional religion among the Haudenosaunee (People of the Longhouse), or Six Nations Iroquois Confederacy. He preached a message that combined traditional Haudenosaunee religious beliefs with a revised code meant to revive traditional consciousness to the Haudenosaunee after a long period of cultural disintegration following colonization. This message was eventually published as the "Code of Handsome Lake" and is still practiced today. This obituary was published just a few weeks after his death in August of 1815 in the Niles' Weekly Register, a publication from Baltimore, Maryland.

Posted by Iroquois and Wabanaki Beadwork at 4:54 PM No comments:

Since the early 19th century, Haudenosaunee (Iroquois) beaded bags have been admired and cherished by travelers to Niagara Falls and other tourist destinations for their aesthetic beauty, detailed artistry, and the creative spirit of their makers.  These bags played a crucial role in the subsistence of many Indian families during the 19th century. This lavishly illustrated history examines these bags – the most extensively produced dress accessory made by the Haudenosaunee – along with the historical development of beadworking both as an art form and as a subsistence practice for Native women.

The beaded bags are considered in the context of art, fashion, and the tourist economy. Illustrated with over one hundred and sixty of the most important  and exquisite examples, along with a unique collection of historical photographs of the bags in their original context, this book provides essential reading for collectors and researchers of this long neglected and misunderstood area of American Indian art.

Hard Cover with Dust Jacket - 8.5 x 11 inches. 184 pages.
Limited printing of only 1500 copies. The book can be ordered from me directly through my website: http://www.gerrybiron.com/pages/publications.html

Below is a sampling of pages from the book so you can preview it before purchasing. 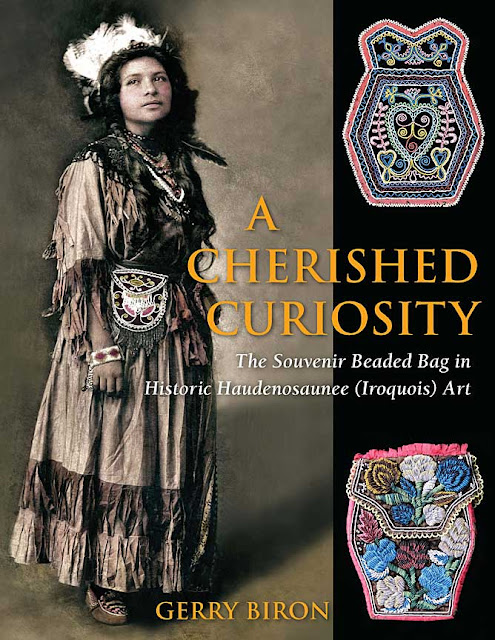 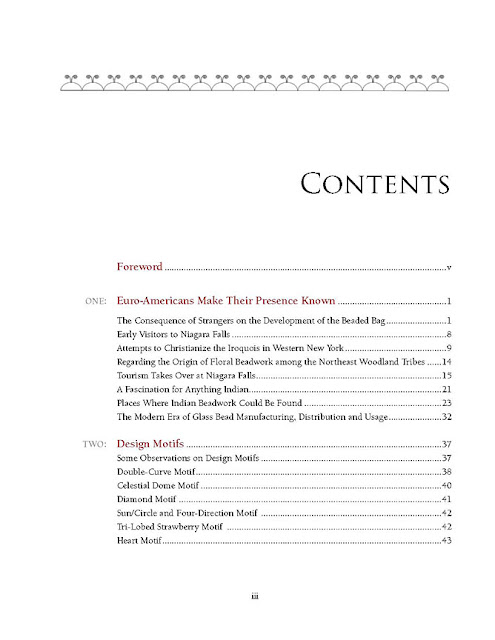 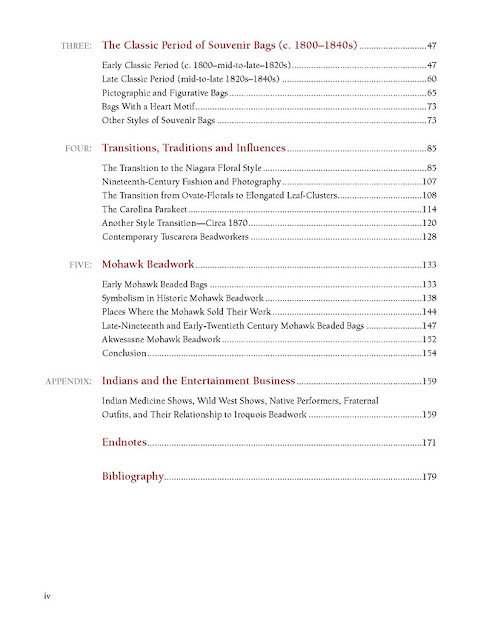 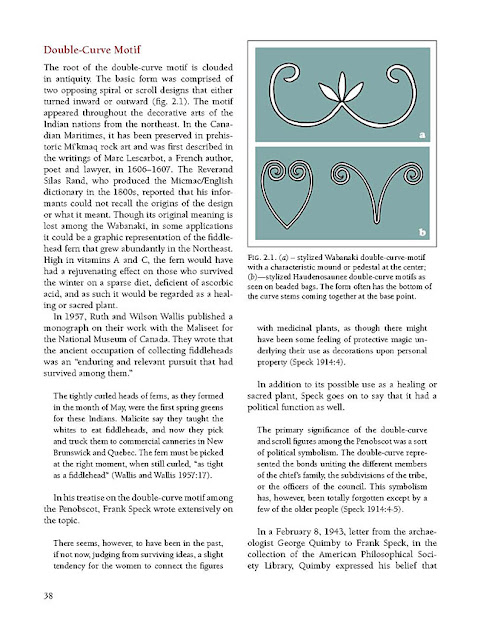 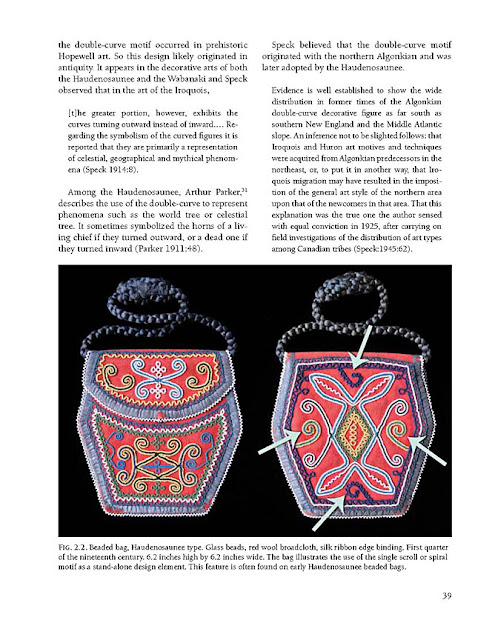 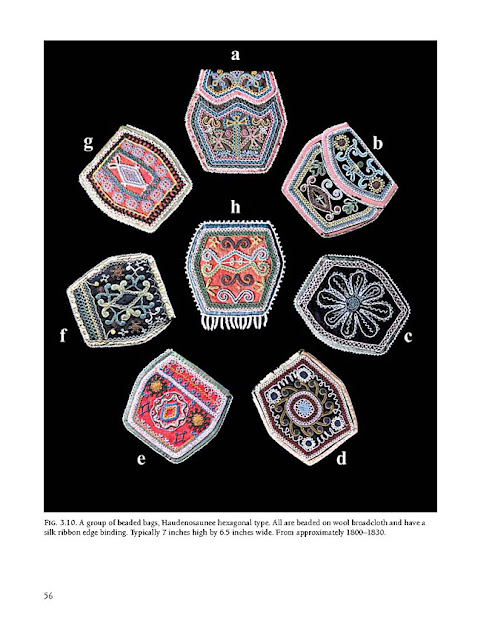 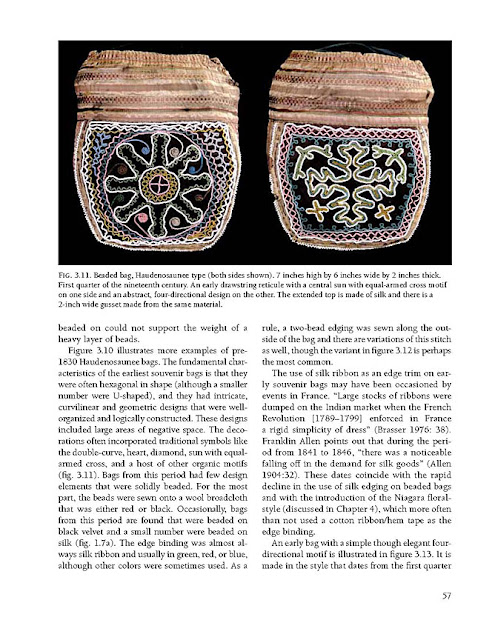 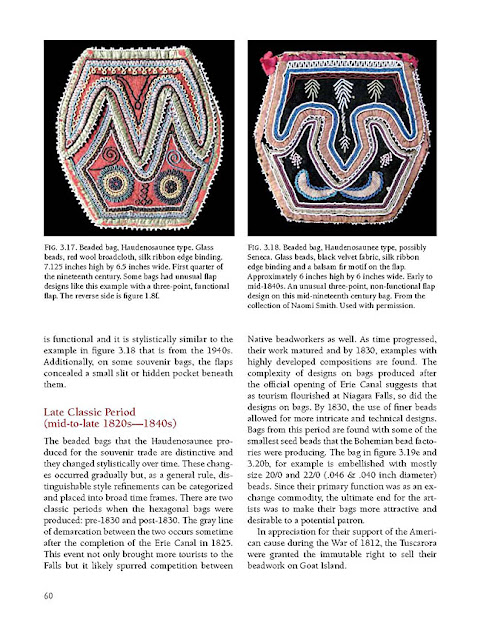 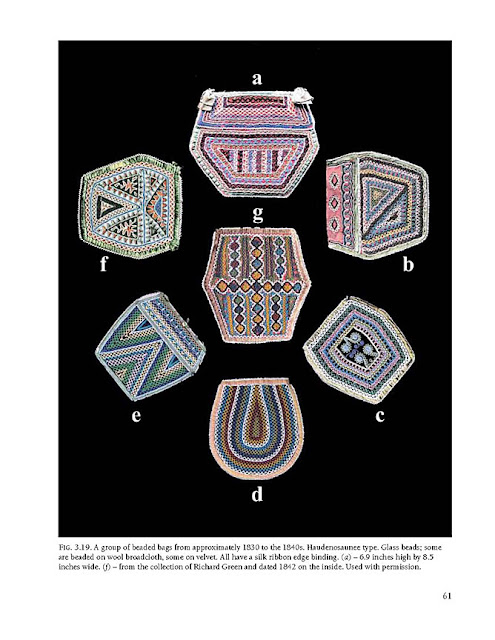 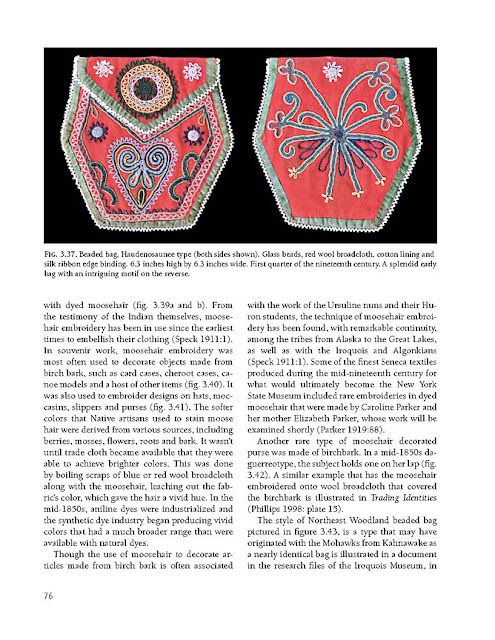 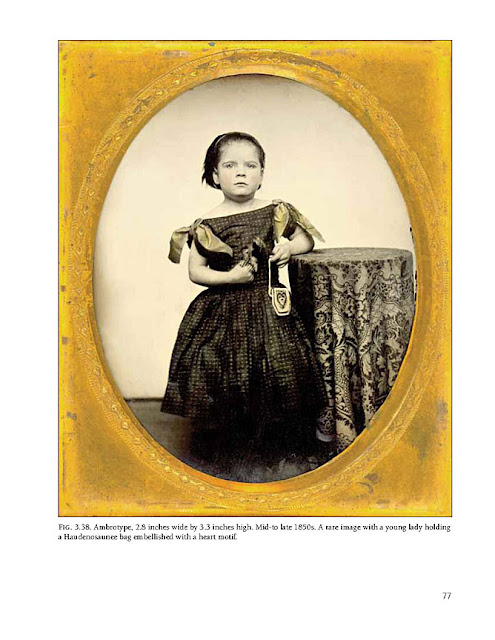 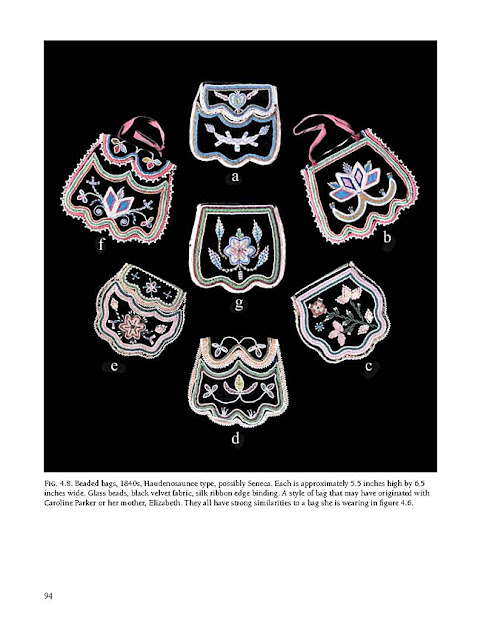 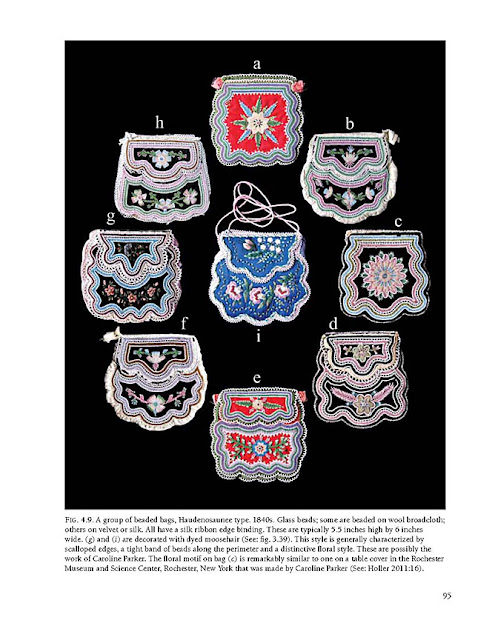 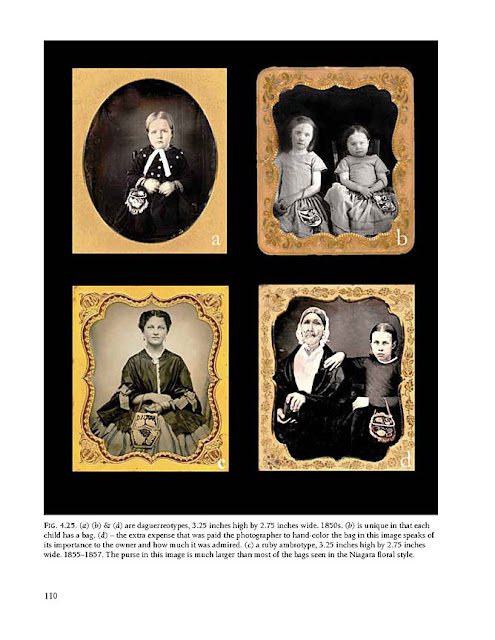 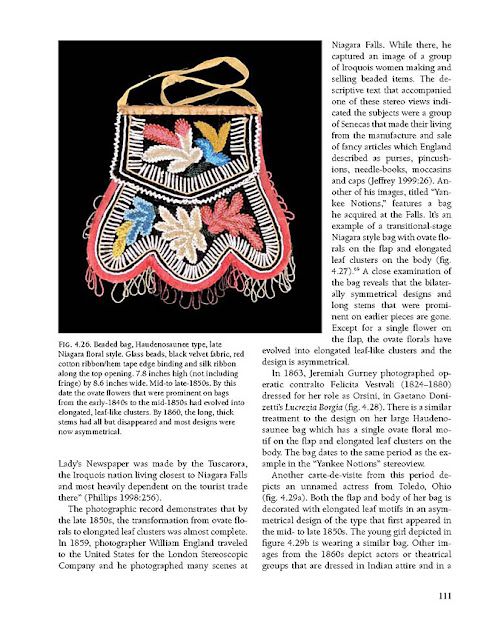 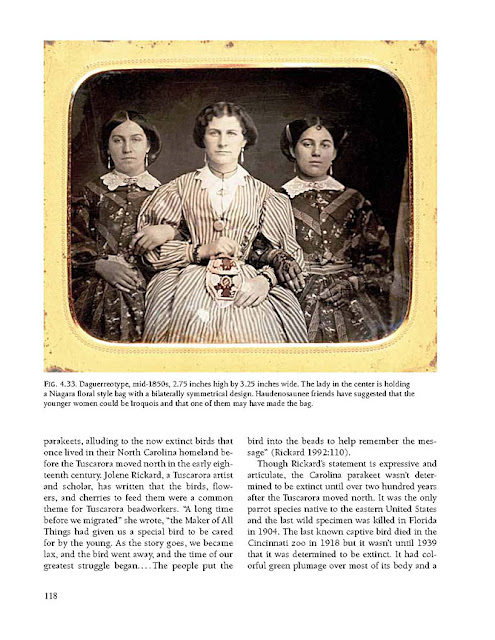 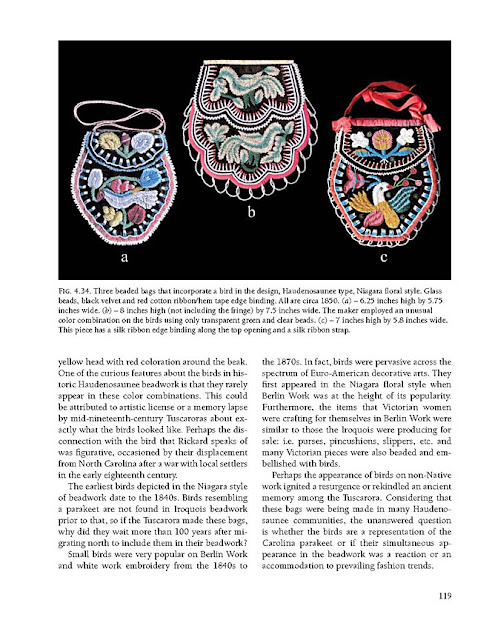 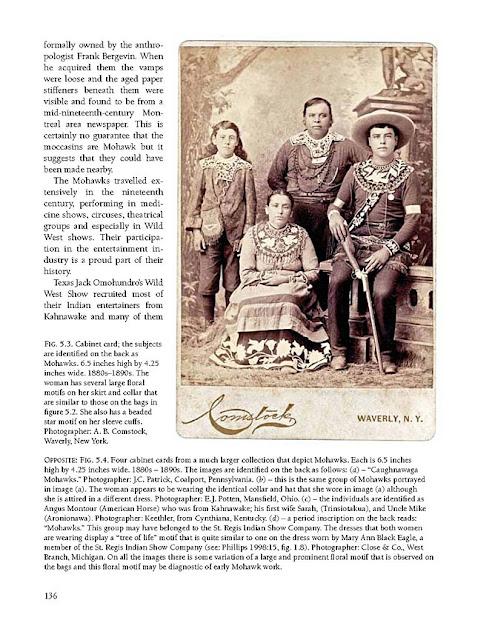 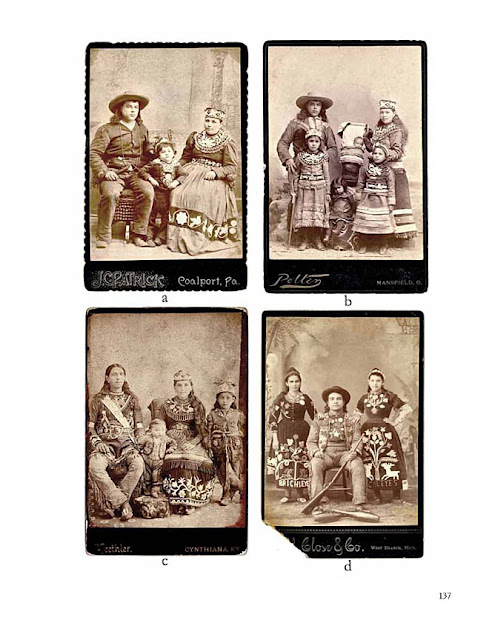 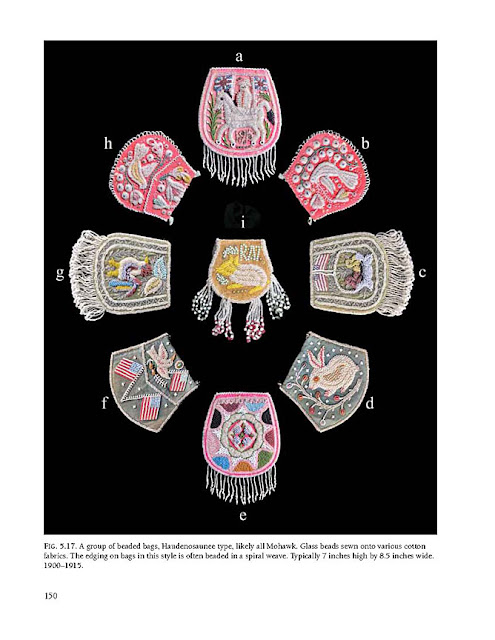 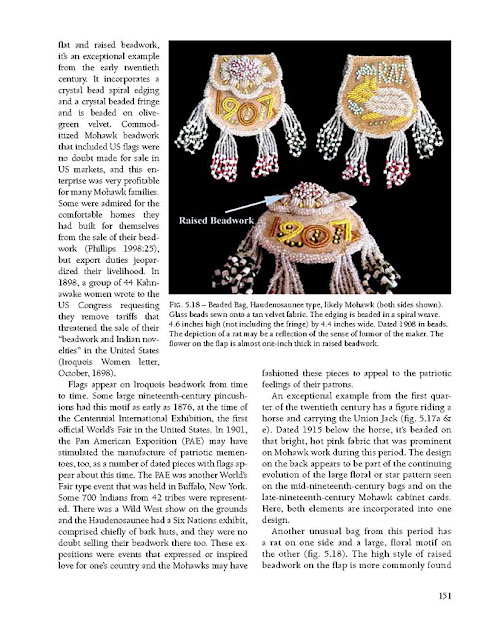 Posted by Iroquois and Wabanaki Beadwork at 4:16 PM

Non-Native purses have been around since at least the 16th century.   They are known by many names; among them the pocketbook, the purse, chatelaine, the handbag, and the reticule. There was also a man’s travelling bag called a handbag or satchel, although this was a piece of luggage but during the 19th century, the term “handbag” came to describe a larger version of a woman’s purse. The earliest handbags that were designed for women featured compartments, a sturdy handle, metal frames and fastenings all inspired by men’s travelling bags. By the mid-19th century, Berlin woolwork purses with floral and geometric design were also at the height of their popularity. But of all the bags that have come in and out of fashion over the years, perhaps none has been more cherished than the beaded bag.

Sandy Levins, the director of programming at the Camden County Historical Society, wrote: Beaded bags, whether handcrafted or commercially produced, have been in vogue in North America for well over 200 years and in Europe for much longer. In the late 1300s, the English poet Geoffrey Chaucer described one in "The Miller's Tale," the story of a love affair between an Oxford student and a carpenter's wife. Of the female character he wrote: “By her belt hung a purse of leather tasseled with green and beaded with Italian beads…."

The earliest beaded bag was usually knitted in a drawstring style called a reticule, which also became known as an “indispensable” because it developed a universal popularity almost overnight. So popular was the reticule, it became an absolute “must” for fashionable ladies in 19th century Europe where the Empress Josephine, internationally known for her sense of fashion, carried a reticule with her at all times. Romantic figures, pastoral scenes, and flora and fauna became common themes rendered in the tiniest of beads.

Between 1820 and 1830, beaded bags supported by metal frames came into vogue. Coming primarily from France and Austria, the frames were made of everything from pinchbeck, an alloy of copper and zinc made to look like gold, to tortoiseshell. Chains, often formed of decorative, ornate links, were attached to the frames.

During the first few decades of the 19th century, purse design was at its height. Napoleon’s wife Josephine was a purse aficionado and designers worked tirelessly to please her and her court with an endless array of purses. Unique shapes, materials and construction methods were a hallmark of the time and it’s during this period that purses with metal frames came into being.


Occasionally, we come across Native made beaded bags that have the same metal frames that are found on European bags which raises the question; were they originally designed into the bags by Native artisans because they were fashionable, or were they added later by someone else? Paula Higgins, a member of the Antique Purse Collector's Society and the co-author of a book on antique and vintage purses titled A PASSION FOR PURSES has shed some light on this. She informed me that the purses pictured in this posting, that have a metal twist clasp, all date after the 1870s. Collectors of antique purses have been aware that many purses, which would include those made by Native artisans, were mounted or re-mounted on later frames. It was a common practice as framed purses gained popularity in the late 19th century. So essentially, the owners recycled the bags and put them on more contemporary frames. This practice continued on into the early 20th century. The only exception is the bag in the Daguerreotype in figure 12. Paula has informed me that this frame, which is barely visible, has a chain which is classic 1840s and seen on many purses from that period. These frames are shaped like an eyebrow but with less of a curve and it is made of steel, as is the chain. So this frame is contemporary to the bag pictured and might have been added by the Native artisan who made the bag.

In July of 2011, I did a posting that illustrated a collection of 19th century images of women and young girls who were photographed with an Iroquois beaded bag.

These old images testify to the prestige and the prevailing taste for Haudenosaunee beadwork during the middle decades of the nineteenth century and it speaks to the especially high regard Victorian women held for these purses, an appreciation that would contribute to the preservation of the beaded bags now so prized by collectors.

I’m always on the lookout for these old images and below is a new group that has surfaces since the previous posting.


My thanks to Karen Augusta for helping me date some of the old images.
http://www.antique-fashion.com/Antique-Fashion/home.htm
Posted by Iroquois and Wabanaki Beadwork at 5:33 PM 1 comment: