To see more fine examples of Iroquois and Wabanaki beadwork follow this link.
Made of Thunder collection


Some uncertainty remains over the attribution of Northeast Woodland material that has come to be known as “souvenir” or “fancy beadwork.” Part of the problem in assessing the tribal origins and the dates when certain beading styles were introduced, especially for early beaded bags, is the lack of well-documented examples. It’s often difficult to attribute tribal identity to a piece because of the meager ethnographic evidence and the extensive trading that occurred between indigenous communities. Additionally, the Iroquois often wholesaled their work to middlemen, shop keepers, and to other Indians; designs and motifs were borrowed and exchanged between Native communities. Added to this is the movement of pieces by tourists.
Many published examples have attributed dates and tribal origins but quite often these attributions are based on the opinion on the individual doing the assigning and not always on solid evidence. Quite often we find similar pieces attributed to diverse tribal groups or communities with dates of origin fluctuating from the 1830s to the turn of the century. Though the corpus of reliably attributed examples is meager, I have come across a number of Iroquois pieces in my research that were either dated or had their tribal origins soundly documented. The next several postings will discuss this material. I’ll try to do this in chronological order so that it’s easier to reference. If you have documented pieces to contribute please contact me and I’ll post them here so that we can broaden our understanding of this exceptional material.
You can click on any of the images to make them larger.

This first bag is from the collection of the New York State Museum, in Albany. They acquired in 1964. It was originally purchased by Dennis Doyle, a New York City merchant. He procured the bag in Albany, in 1807, while there as a guest of Robert Fulton for the inaugural launch of Fulton’s steamboat, the Clermont. Doyle was the uncle of Mrs. Charles M. Purdy, of Marlborough, Massachusetts, whose name was inscribed on an old note inside the bag, where she identified it as having been acquired from an Indian, by Doyle, on that occasion.  Mrs. Purdy’s granddaughter subsequently obtained it from her grandmother and upon the granddaughter’s death, a friend donated it to the museum. When this piece was gifted to the museum in 1964, no research had been done on souvenir beadwork. This may account for the Mahikan (?) attribution [more commonly spelled Mahican or Mohican and not to be confused with Mohegan, from southern Connecticut]. The Mahikan attribution in the museum’s files contains the question mark, which means whoever recorded the tribal affiliation wasn’t sure who made it and was offering a best guess. This early piece is made in the classic Haudenosaunee hexagonal shape. This profile was woven into several early wampum belts where the form signified the territories of each of the Six Nations in the League of the Iroquois.  This could be why the shape was selected and why it is so prevalent on early Iroquois souvenir bags. 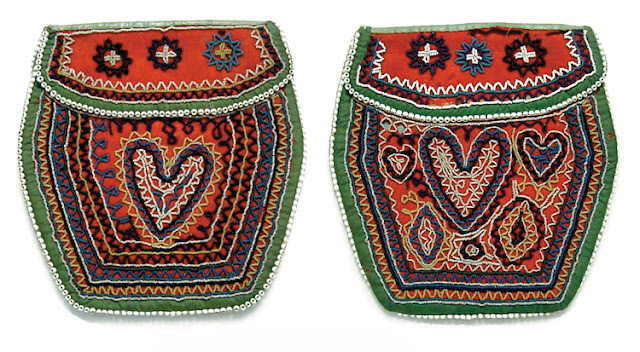 The old note found inside this next piece reads: “This bag was given to me in August 1919 by Miss Blake of Cape May – she is 88 years old and said the bag was brought from Niagara Falls 125 years ago by a relative. It was made by Indian women. Grace May Lissenden.” If the information is correct, it would date the origin of the bag to 1794 which seems exceptionally early for this style of bag. It’s similar enough to the Dennis Doyle bag above that they are likely from the same period. What distinguishes early bags in this style is their hexagonal shape; the linear style of beadwork; there are no areas of solid bead fill, and the designs have large areas of negative space. Private collection. 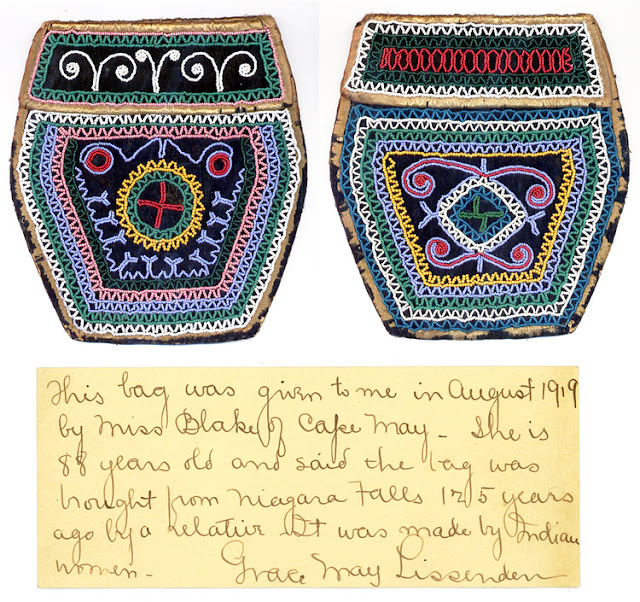 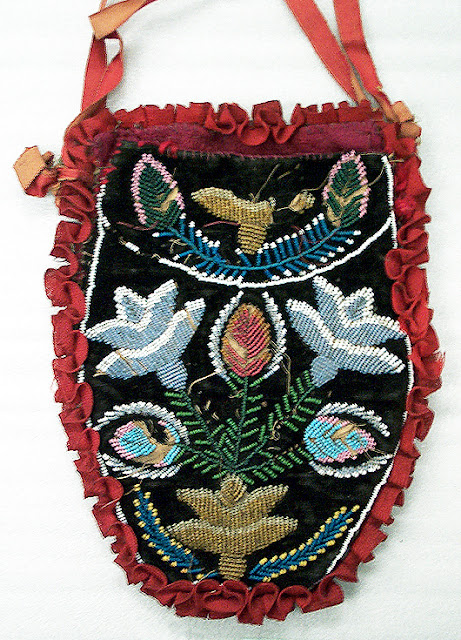 This piece is from the collection of the Canadian Museum of Civilization, Hull, Quebec, object #111-X-33.The museum’s documentation for this example says it was collected in 1819 by Captain Thomas Burrows when he and Colonel By were building the Rideau Canal, perhaps in the vicinity of Aux Noir (which is only a few miles southeast of the Mohawk Reserve at Kahnawake).  5.8 x 4.4 inches.
Clarification:


Someone raised a question about the dating of this bag so I reviewed my copy of the museum documentation and there is a question mark after the date (not sure how I missed that the first time but it’s quite obvious now) so whoever came up with the documentation for this piece was no doubt offering a best guess. This prompted me to do some checking on the history of the canal and Colonel By did not arrive in Canada until 1826 so there is no way that he and Captain Burrows could have acquired this in 1819. This throws the dating of this piece out the window. The museum dating of this piece was always problematic and it is more likely from the same time period as the other Niagara floral bags (1840s-1850s).


This next hexagonal shaped Iroquois beaded bag had an opening along one side that revealed an old newspaper on the inside, between the bag face and the lining that was no doubt used to stiffen the bag during construction. It was dated 1822. Private collection. 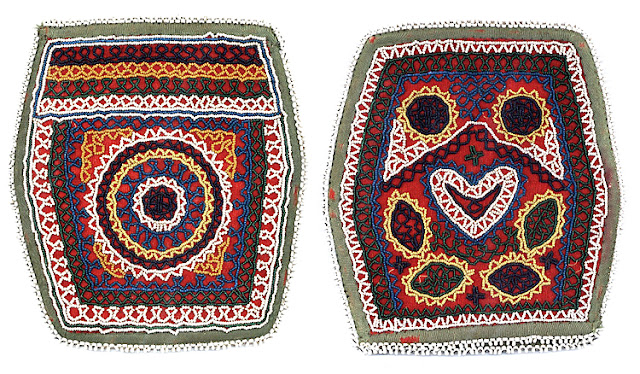 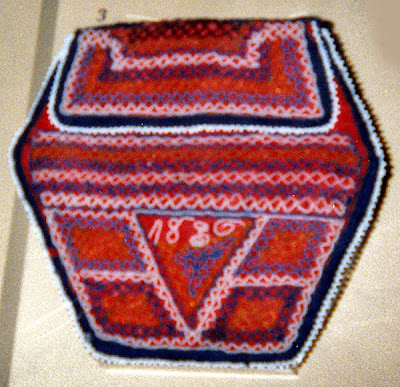 Hexagonal bag that was on display in the Across Borders: Beadwork in Iroquois Life exhibit. It’s dated 1830 in beads. The Across Borders exhibit was a traveling exhibition of Haudenosaunee beadwork organized and circulated by the McCord Museum of Canadian History, in partnership with the Castellani Art Museum of Niagara University, and the Iroquois communities of Kahnawake and Tuscarora.  It opened at the McCord in June, 1999, and travelled to several other venues until February, 2003. 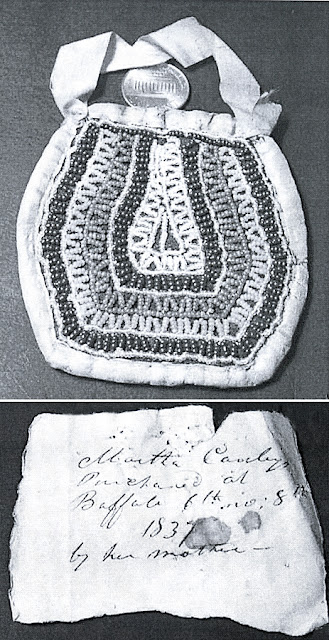 Two bags attributed to a Martha Camby appeared on eBay in 2009. This first bag measures approximately 3 inches wide x 3 inches high. The note that accompanied the bag reads: “Martha Camby, purchased at Buffalo 6th mo; 8th day; 1837 by her mother.” Considering where it was purchased (possibly at the Buffalo Creek Reservation which was just outside Buffalo) that bag may be Seneca. The seller indicated the bag came from the Camby/Morris estate in the Germantown section of Philadelphia. 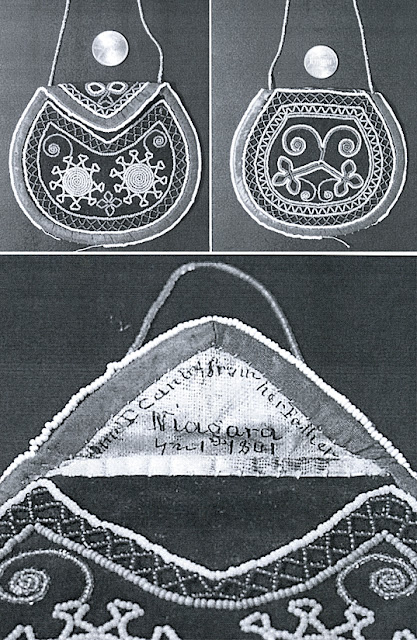 This next bag, also from the Camby/ Morris estate and it has an inscription on the inside flap of the bag. It reads: “Martha Camby from her Father, Niagara May 1st, 1841.” The bag is 4 inches wide x 3.5 inches high.

An old note in the following piece reads: “Hannah H. Carpenter, from her mother, purchased at Buffalo, 8th, 28th, 1845 the work of the Indians of the Seneca Nation, a settlement about six miles from Buffalo.” This note indicates that the bag was purchased at the Seneca reservation at Buffalo Creek.

The Treaty of Buffalo Creek, January 15, 1838, . . . ratified by the United States Senate and proclaimed by President Van Buren in April, 1839, came very near accomplishing the removal of all the Indians of the Buffalo Creek and the other western New York reservations from the state. So much dishonest corruption had entered into the sale of these reservations to the Ogden Land Company, that the strenuous efforts of those who exposed the frauds practiced,… resulted in the compromise treaty of May 20, 1842, by which the Seneca retained the Allegheny and Cattaraugus lands, giving up the Buffalo Creek and Tonawanda reservations to the Ogden Land Company, although the Tonawanda Seneca ultimately regained their land by purchase. . .  The four years which followed the treaty of 1842 were years of bitterness while the removal of the Indians to the Cattaraugus and Allegheny was being effected. From: The Seneca Mission at Buffalo Creek by Henry Raymond Howland, published by the Buffalo Historical Society, Buffalo, New York 1903, pages 160-161.

This is one of the better attributed bags from the mid-nineteenth century. It was formally in the collection of a small historical society in New Jersey. Collected in 1845, the documentation for this piece is notable as it tells us who made it and when and what reservation it was from. It could only be better if it indicated the name of the artist who produced it. The disheartening reality is that this bag was made during one of the most painful periods in the annals of the Seneca community at the Buffalo Creek Reservation. It’s astonishing that they were still producing beaded bags during what was arguably one of the most difficult times in their history. Private collection. 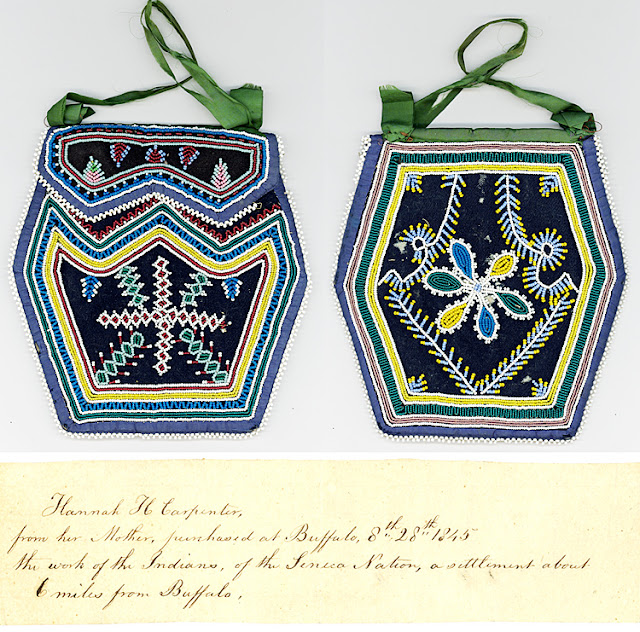 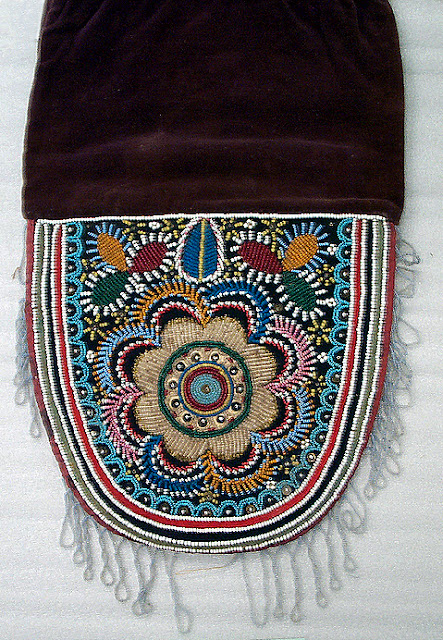 Collected sometime between March, 1841 and November, 1842 by James du Pres, third Earl of Caledon from Tyrone, Ireland who came to Canada as Captain of the Coldstream Guards.  It was collected locally so this piece may be Mohawk. From the collection of the Canadian Museum of Civilization, Hull, Quebec, #111-1-1176.

The following bag is made in the style of beadwork that Caroline Parker was producing in the mid-nineteenth century. Caroline was a Seneca, originally from the Tonawanda Reservation in western New York. It has an inscription on the inside flap that reads: “Niagara Falls, Saturday, July 18th, 1846, M.L. Geary.” Private collection. 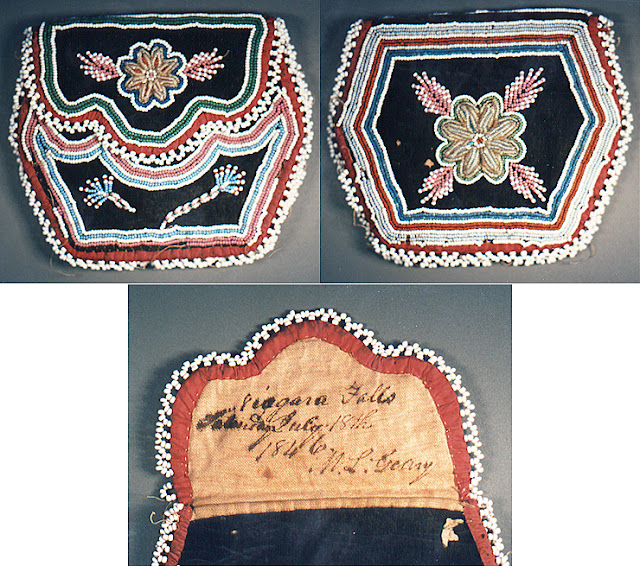 Another bag in this style has a newspaper liner beneath the inside flap that is dated February, 1848. Private collection. 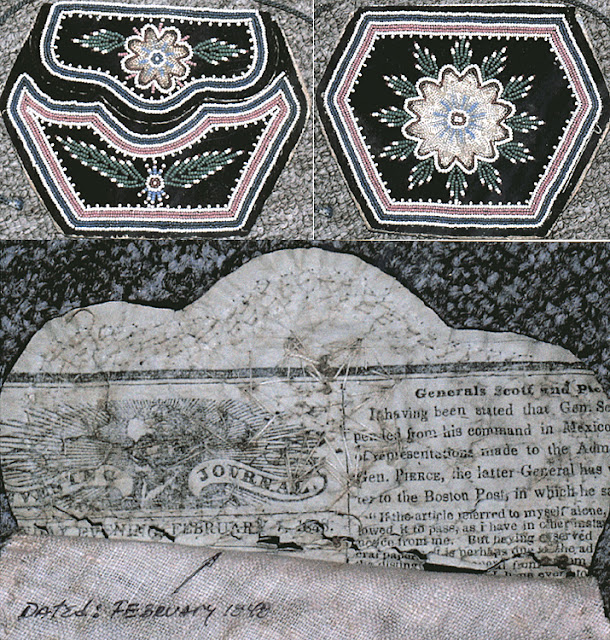 The final piece in this group had an old note which reads as follows: “This was my mothers, Jennett Handys, she bought it of the Indians sometime before 1850.” Private collection. 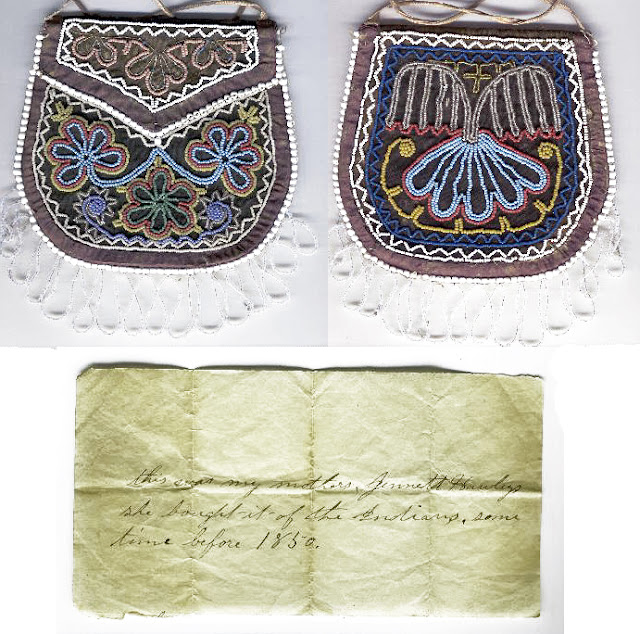 Posted by Iroquois and Wabanaki Beadwork at 4:39 PM