Addendum
I’ve added some additional images to this section. You can find them below in the addendum.


You can see more exquisite examples of Iroquois beadwork on my website:
http://www.gerrybiron.com/


Part of the appeal that these old photographs hold for us is that it puts the beadwork in context. These were the people that were buying it and the fact that so much of it has survived indicates how admired it was. Additionally, by dating an old photograph we can also date the beadwork that is displayed in the image. 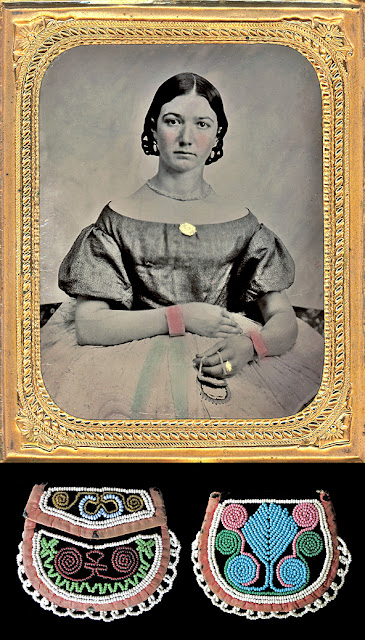 In this circa 1860 ambrotype, the young woman is holding a diminutive purse that is similar to the one directly below her image. This style of purse may have originated with the Mohawk as there is an image of a similar purse in the research files of the Iroquois Museum, in Howes Cave, New York with a note that it was acquired at Caughnawaga, circa 1860.

This next image is a circa 1880 tintype. The lady is holding what is generally referred to as a "box purse" because of their boxlike shape and because many of them also had the word "box" stitched in beads on the lid. The design on her purse appears to be a clover-leaf motif. The box purse immediately below this image is a similar example. 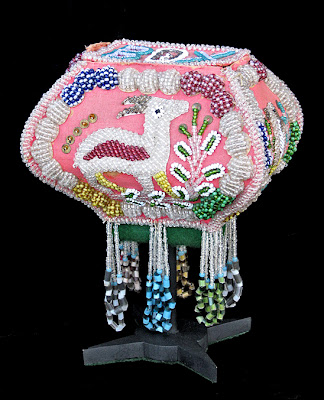 Many of the box purses were decorated with floral and leaf motifs but finer examples often had bird or animal motifs. This example is likely Mohawk and circa 1900.

Another style of diminutive purse that was being made at this time is generally referred to by the Tuscarora as a "barrel purse." In this hand-colored, circa 1870 tintype a child can be seen holding one. This particular example was likely Tuscarora. A similar purse, though more elaborately beaded, can be seen directly below this image.


This purse has "From Niagara Falls" beaded on the flap and an owl and squirrel motif on the back. Circa 1880. 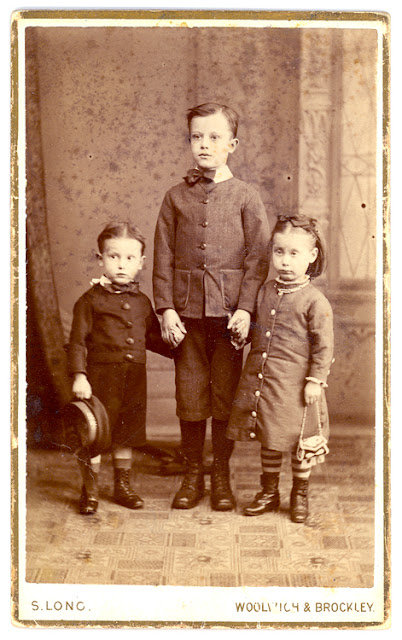 This CDV was taken in London, England. It's dated 1880. The young girl is holding a Tuscarora barrel purse. 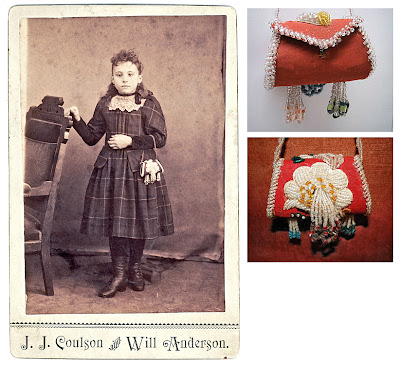 This is a late 19th century cabinet card of a young girl with a barrel purse. This example, which is more elaborately beaded, is in the high style of raised beadwork that is usually attributed to the Mohawk. A similar barrel purse is shown beside the image. 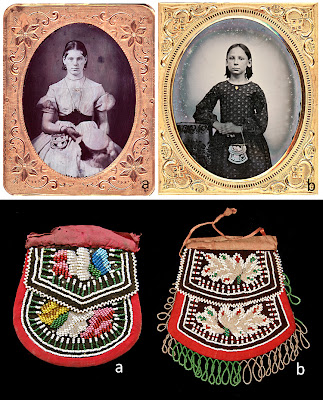 These are two circa 1860 ambrotypes. The young ladies are holding examples of  a Niagara floral style beaded bag. More on the Niagara Floral Style


The two bags below the images are similar to those depicted in the photographs and date to the same period.

This is a circa 1850 daguerreotype and the young lady is holding an Iroquois bag with a heart motif.
More on Iroquois Bags with a Heart Motif


The bag directly below this photograph is similar to the one in the image. 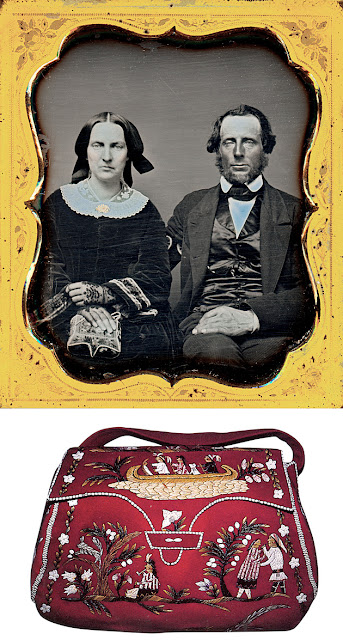 In this circa 1850 daguerreotype the lady is holding a very rare type of Huron purse that was made from birchbark and decorated with dyed moosehair. Stylistically, it is similar to the one illustrated below the image.
The one in red is decorated on wool cloth and similarly decorated in moosehair. It is in the collection of the Horniman Museum in London and it was illustrated in Trading Identities: The Souvenir in Native North American Art from the Northeast, 1700-1900, plate 15 by Ruth Phillips. 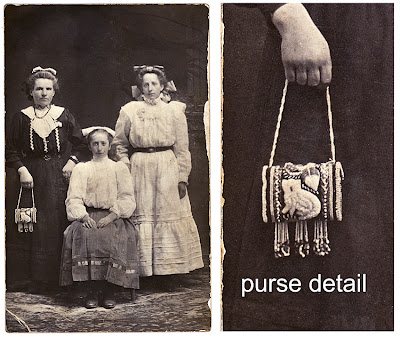 In this circa 1910 real photo postcard the woman on the left is holding a purse with an animal motif. The beading style suggests the piece is Mohawk. 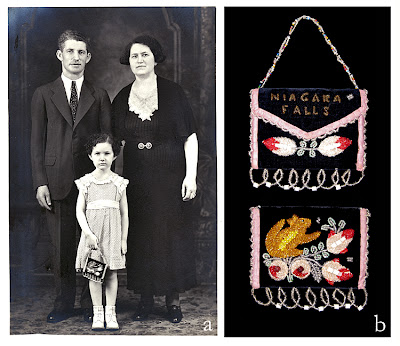 In this circa 1920 photograph the young girl is holding the very  purse that is illustrated on the right. This piece is Tuscarora.


Non-Native women, especially those of lower socioeconomic classes, regarded the beadwork that Iroquois artists produced as having cultural and aesthetic value and also as important signifiers that they associated with the elite and upper classes. Studio sessions, especially those with small town photographers, were affordable to most in the middle class as the literally millions of old images that have survived will testify. Beaded items made by Iroquois women were cherished items and they added charm to a photograph that would otherwise be a commonplace image. In so doing, the sitter acknowledged the sense of self that they associated with the beadwork and their appreciation of the art form. 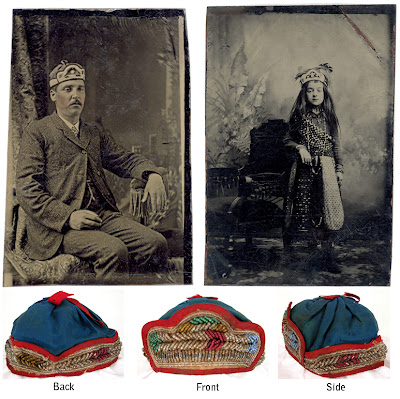 These two tintypes from the1870s-1890s period feature sitters that are wearing a beaded Iroquois cap. Their caps are very similar to the example depicted below the image. 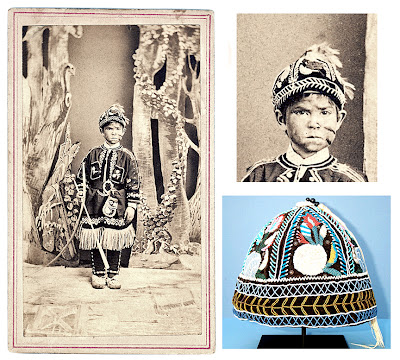 This early 1860s carte-de-visite features a young boy wearing what is sometimes called a "priest style" hat. It's made up of six individual panels and is very similar to the example shown below. He is also wearing Iroquois moccasins and a Niagara floral style beaded bag. Photographer: S.J. Thompson, Albany, New York. 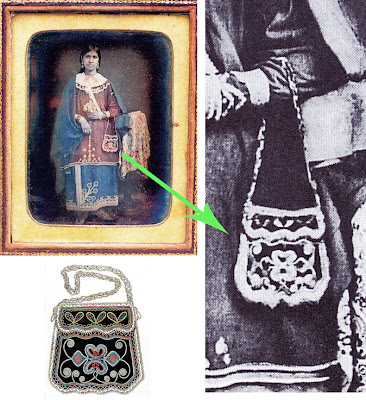 Old images of Iroquois people are occasionally found with them wearing examples of their beadwork. I did an earlier posting of a number of turn of the century postcards of Goldie Jamison, a Seneca who was wearing a beaded bag. This particular image is a circa 1850 daguerreotype of Caroline Parker  a Seneca from the Tonawanda reservation in western New York.
The beaded bag she is wearing in this image was illustrated in the third regents report (1849) for the state of New York that featured examples of her beadwork (the bag directly below the image). 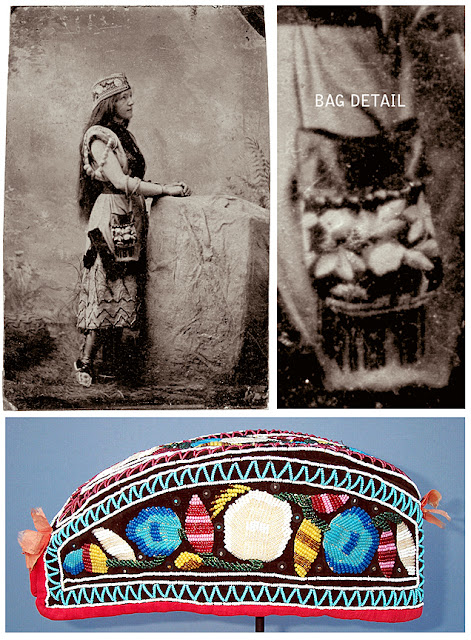 This is a tintype from the 1860s with a young woman wearing an Iroquois Glengarry hat decorated in the Niagara floral style. She may be Native but there is no identifying information with the image.
Her moccasins are also decorated with floral designs. Her beaded bag is unusual and may not be Indian made.


No photographer or location indicated though it came from an estate just outside Buffalo, NY. A similar hat to the one she is wearing is shown below the image.

In this exceptional image, a family of Mohawks can be seen seated before a display of their beadwork. The hanging whisk broom holder directly above the woman’s head is dated 1897, in beads. The designs on the man’s coat depict a lion and a unicorn. These are old Scottish and British heraldic representations and as such, suggest a British tie-in.  In 1860, Albert Edward, the Prince of Wales, visited the Grand River Reserve in Brantford, Ontario. Nine years later, the young Prince Arthur, Duke of Connaught visited there and was appointed an honorary chief. So there may be a partisan connection between these events and the symbols on the man’s jacket. At the very least the heraldic icons imply a Canadian connection.
No photographer or location is indicated but possibly from the Grand River Reserve.

Posted by Iroquois and Wabanaki Beadwork at 5:13 PM