Goldie Jamison Conklin, a Seneca from the Allegany Reservation

See the Addendum at the bottom of this posting for some new information on Goldie.

This posting will feature a number of old postcard images of Goldie Jamison Conklin, a Seneca of the Heron Clan, from the Allegany Reservation, in Western New York. In most of these images Goldie is wearing a beaded bag, presumably of her own manufacture. Records indicate that she was born in Salamanca, New York on November 30, 1892 and died in 1974. Her parents were Jacob J. Jamison & Eliza D. Jamison.   She was baptized at the St. Andrews Church in Irving, New York on July 7, 1921.
For some undetermined period of time she worked as a model for the Cattaraugus Cutlery Co. of Little Valley, New York, as some of the postcards are advertisements for the company’s line of “Indian Brand” knives.
Goldie’s Seneca name was Ah-Weh-Eyu which means Pretty Flower.
Most of the images appear to have been taken by Jesse Lynn Blessing of The Blessing Studio, Salamanca, New York. He was the son of J. H. Blessing who was born around 1850 and died in 1933 in Salamanca, New York. Jesse took over the photography studio from his father and retired in 1945. Except were noted, all the images are circa 1910 real photographic postcards. 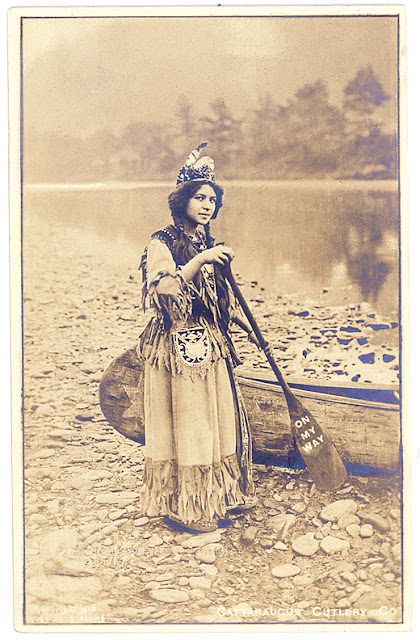 This first image is an advertising postcard for the Cattaraugus Cutlery Company. It's postmarked  Nov. 4, 1912. The printed advertising text on the back reads: I expect to call on you on or about Friday evening, November 8th with a full line of Cattaraugus "Indian Brand" cutlery. If you will keep this card in sight and hold your cutlery order for me, I will send you with your order a beautiful 10 x 14 photograph of this "Cattaraugus" Indian Princess. 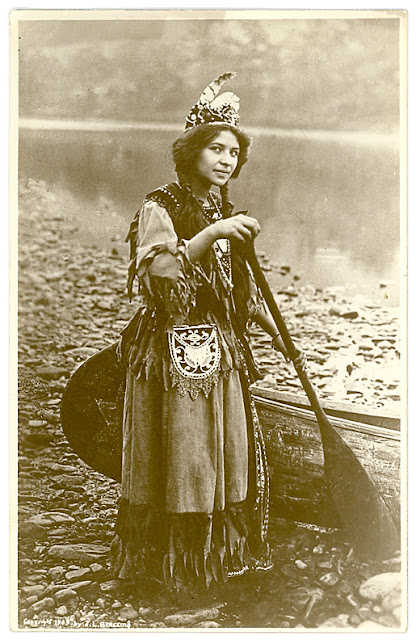 This was the 11 x 14 photographic premium that the company sent you of Goldie. 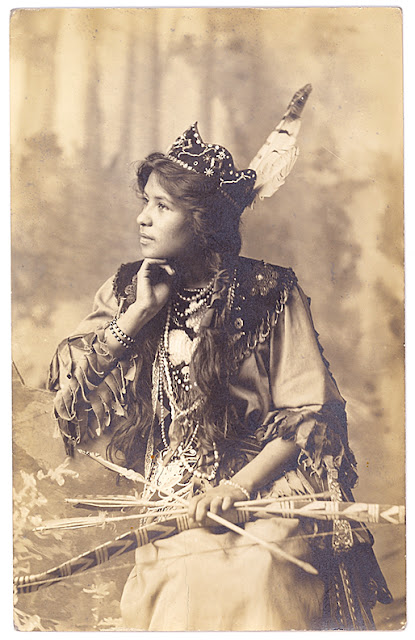 A hand-written, period note on the back of this postcard reads: Goldie Jemison [sp] in Costume, niece of the interpreter. I killed three big ones up in the hills in Salamanca. This girl tied the ribbon on them. Will send you a nice hide in a few days and you can put it in your den. E.W. J.

In a number of these images she is either holding a painted bow or there is one at her feet. The style of the bow is either Modoc, Hupa or Miwok from northern California. It may have been a ceremonial dance bow though some sources indicate it was a hunting bow. It appears to be the same bow in all the images and might have been a prop that was owned by the photographer that took most of these photographs. 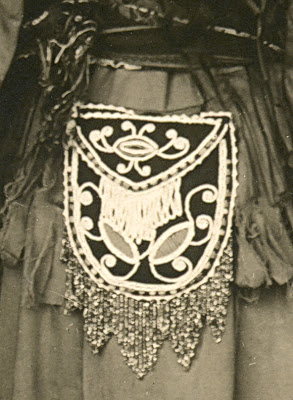 A close-up of Goldie's beaded bag. The different shades of grey in the fringe suggests that multi-colored beads were used to make it. 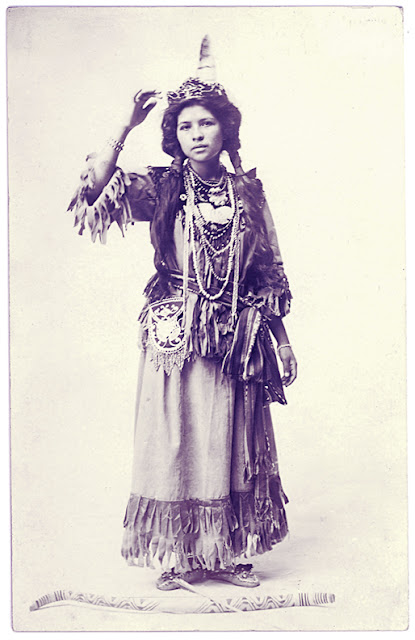 This postcard is unused. The bow at her feet was used in several of the postcards in this series. 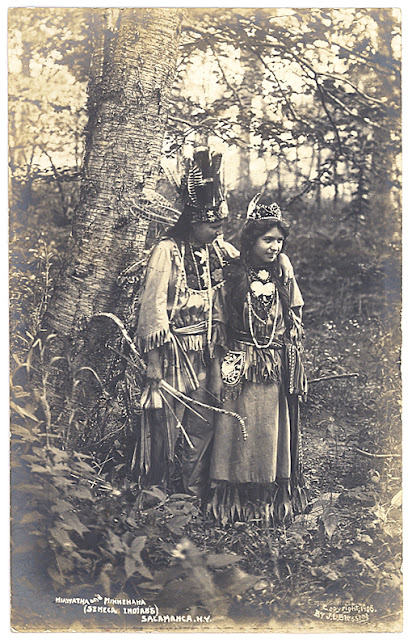 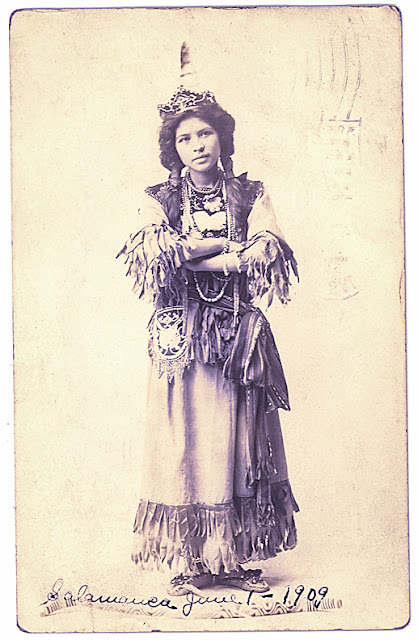 This postcard is postmarked June 2, 1909. A hand-written note on the back reads: Dear Little George Frederick - We are sleeping in Salamanca tonight. In the morning we go to Jamestown there to Lawtons Station. Hope you are well and having a good time. Love to all the youngsters and some smacks from Uncle Paul and Aunt Anna.


It was mailed to an address in Ohio. 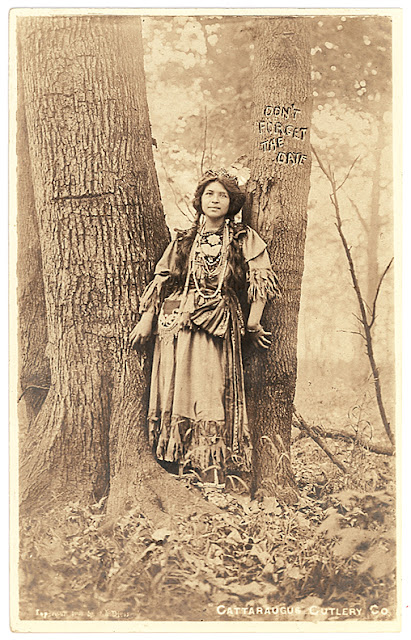 This is an unused advertising postcard from the Cattaraugus Cutlery Company. The printed advertising text on the back reads: Never before have we shown such a splendid line of cutlery as this year. Greater assortment, better values and lots of new things. It will pay you to hold your order until you have seen the Cattaraugus "Indian Brand" cutlery. I expect to call about ___________. Keep this card. It has value for you. Yours truly, R.D.R. Sullivan.


The bag in this image is missing the flap and suggests that it's construction may have been concurrent with her modeling career. 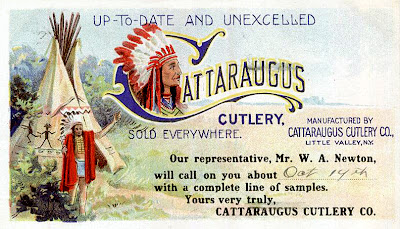 This is a printed advertising postcard for the company. No date but looks to be circa 1910. 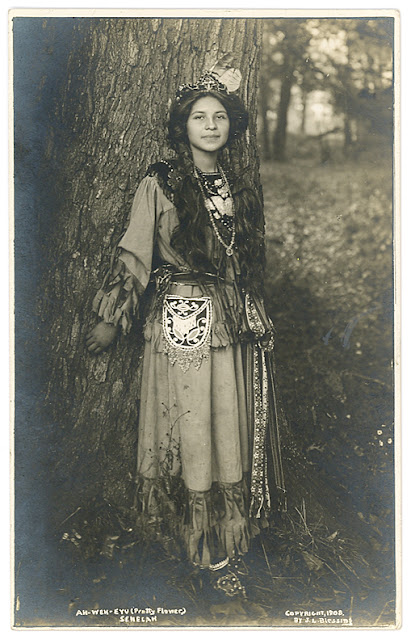 An unused card of Goldie. In 2003, I painted a portrait of Goldie, titled Made of Thunder that was exhibited in conjunction with the beadwork exhibit by the same name. This was the image of her that I used as my model. Her portrait  is illustrated below. 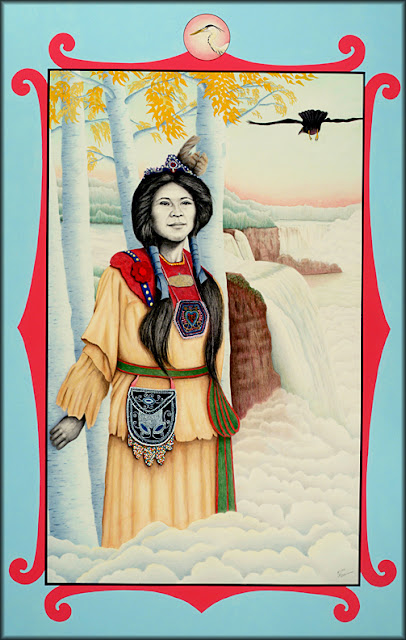 The most famous legend in Niagara Falls is that of the Maid of the Mist and the Thunder God Hinum, who was believed to live behind the Falls. In an apocryphal version of this myth, an Indian maiden is sacrificed annually by sending her over the cataract in a canoe, laden with fruit to appease Hinum.
In my portrait of Goldie, she is represented in a symbiotic relationship with the Falls, as a Native artist attuned to her surroundings and one proud of her heritage. From her waist belt she wears a beaded bag of her own manufacture.  The bag that hangs from her neck has a large, central heart motif that is often seen in Iroquois work. 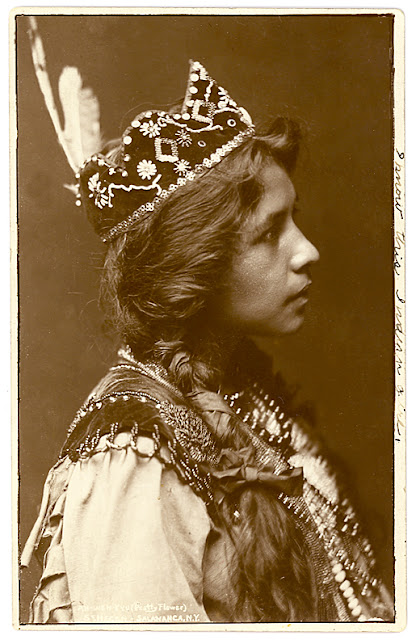 This postcard was postmarked from Salamanca, NY in 1914. A hand-written note on the back reads: Dear Hazell, I received your card about the pictures of "Creation." I always go home on Sundays so was not here the first day they (the Indians) were here and didn't find out where they were until after they had gone. The posters that were around didn't tell where they were being shown. I was very sorry to have missed them and will try and see them if I can. Thanks for sending the card anyway. Love, Harriette. 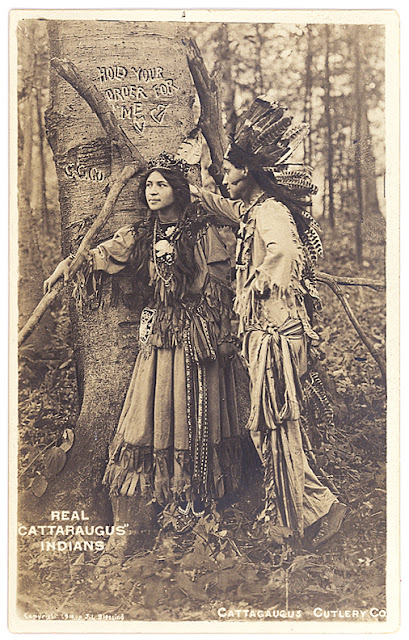 An unused advertising postcard from the Cattaraugus Cutlery Company. The printed advertising text on the back of this card reads: Don't lose this card. It is valuable to you. There is a beautiful photograph (10 x 14) of this "Cattaraugus" Indian maiden at the home office, and if you will call my attention to this card when i call on ________ I can get the photograph sent with your order.
With Cattaraugus Cutlery Co., Little Valley, N.Y., makers of the celebrated "Indian Brand" cutlery. 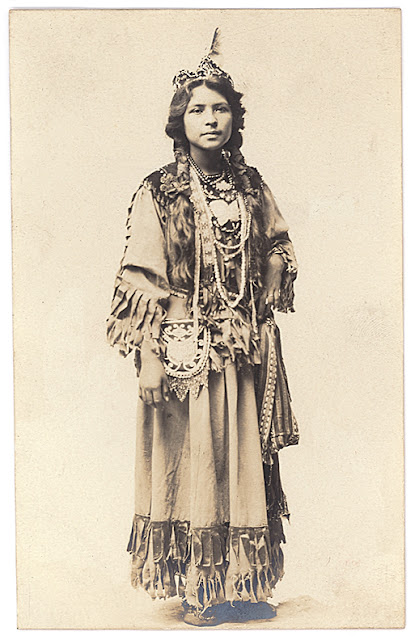 An unused postcard of Goldie. Circa 1908.
This postcard was postmarked in Salamanca, NY on June 15, 1911. A note on the back of the card reads: Hello C.L., Some class to these people, don't you think so? Had a swell time last night. Your old friend, Jim.  Mailed to an address in Pennsylvania. 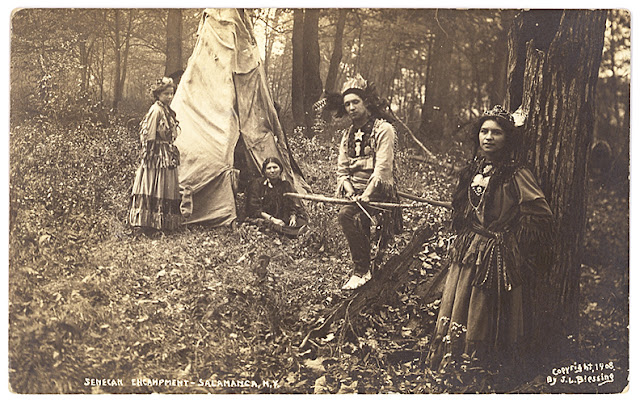 This last card is of a historical parade in Salamanca. Goldie is standing on the horse drawn float in the foreground. The photographer's blind stamp on the back says: Photo by Ralph J. Eddy, Salamanca, N.Y. Beneath this image are two additional detail views. 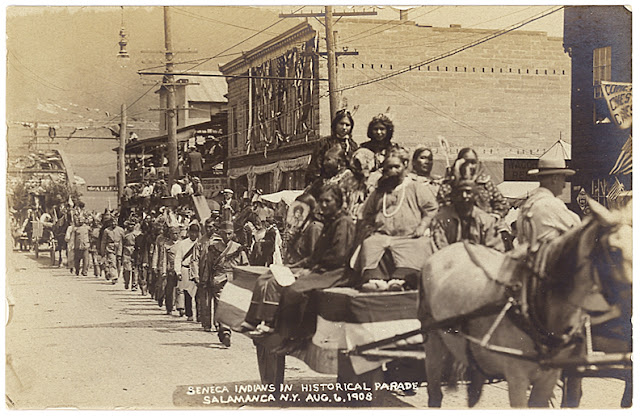 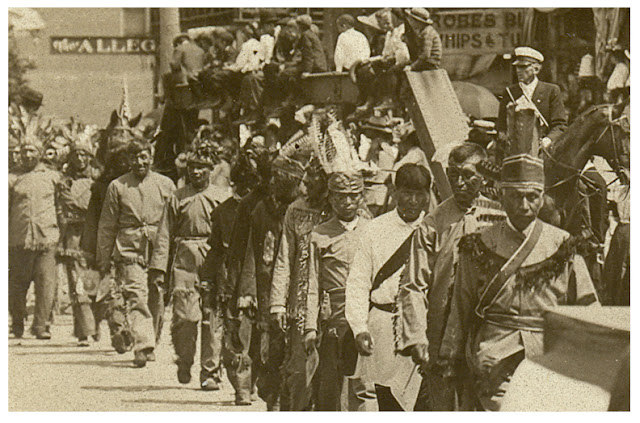 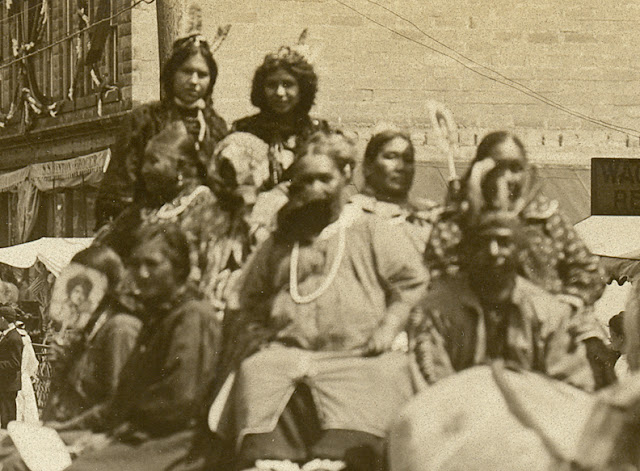 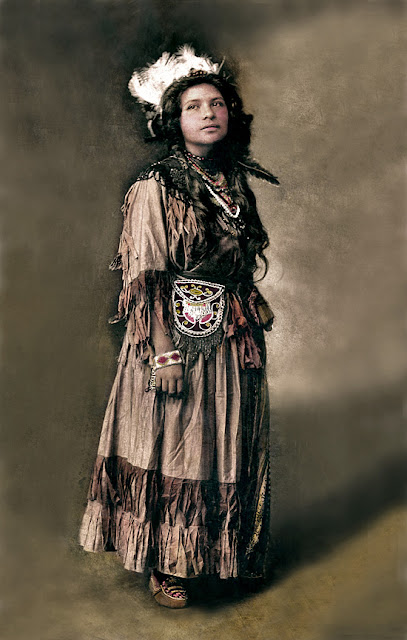 After I did this posting on Goldie, I was contacted by Jim Conklin, her grandson. Jim was born in 1949 and his earliest memories of Goldie were of an older woman, "Grandma Conklin," and the last time he saw her was in 1966.
Jim wrote me that he knew very little about his grandparents. “Goldie married Charles Conklin around 1912. My oldest uncle, Chester (Chet) was born in 1913. My dad, Robert, was the second child, born 11/17/18. Four more sons followed: twins Carl and Earl (1928), George, and Charles Jr. They lived in Irving, NY, and later moved to Silver Creek, NY, where they lived on a small farm during the years my family visited them on the reservation. I didn't realize it as a child, but my grandparents were rather poor, as were most people on the reservation. My father joined the Marines in October 1939, shortly after the outbreak of war in Europe. He was stationed at Pearl Harbor on December 7, 1941, and spent the war years in the Pacific. While home on leave in late 1944 - early 1945, he married my mother, Marilyn, and returned to the Pacific. If not for the atomic bombings, he probably would have been involved in the invasion of the Japanese mainland. My grandfather died around 1960, and my father died from burns suffered in an industrial accident in February, 1972. I last visited the reservation on a whim in 1977. Goldie had died, and I didn't know if any of my uncles could still be located. I went to my grandparents' home and found that my uncle Earl had opened a bait shop there. He gave me the photos of Goldie (the hand colored image above). I moved to the Denver area in 1978, and never returned to the reservation. A family friend who worked for the Bureau of Indian Affairs had kept in touch with my uncles for many years, but lost touch about 15 years ago. I doubt that any of them are still living…Goldie always greeted us with hugs and smiles, telling us we were ‘such good-looking children.’”
Posted by Iroquois and Wabanaki Beadwork at 8:17 PM