To see more fine examples of Iroquois and Wabanaki beadwork follow this link.
Made of Thunder collection


Iroquois floral bags in the Niagara style first appeared in the mid-1840s and this is well documented by dateable photographs from this period. There are also a number of well attributed pieces that corroborate the mid-nineteenth century origin of this style. See a recent article in American Indian Art Magazine, Fall – 2010, titled: A Cherished Curiosity: The Niagara Floral-style Beaded Bag in the Victorian Era for more information on this style or contact me by leaving a comment at the end of this posting and include your email address and I’ll send you a PDF file of the article. 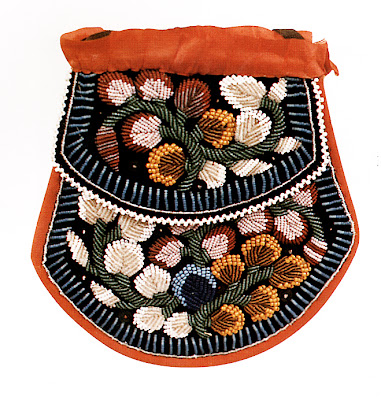 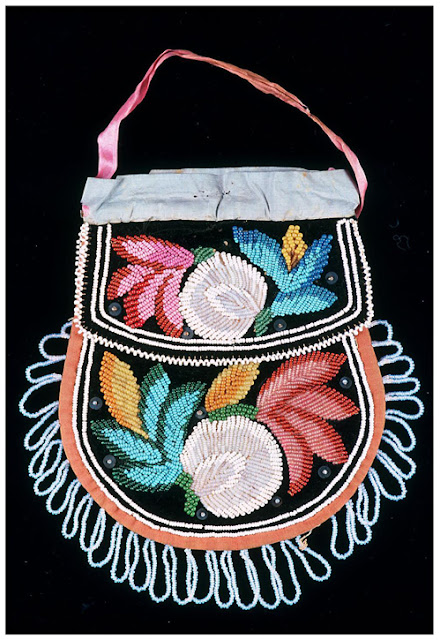 Another bag in the Niagara floral style is from the Old Sturbridge Village (Massachusetts) collection. A period note, inside the bag reads: “This bag was bought of the Indians in 1852 at Niagara Falls by Grandpa Allen.” An old catalog card in the museum files reads: ex. collection of the Quinebaug Historical Society.

A period note with the following Niagara floral bag reads: “Salmon B. Cowles. 1853, gave purse to sister. Bought in Iowa.” One of the common features of the early Niagara floral style is the large, ovate floral motifs and long, thick stems. Additionally, some early pieces had bilaterally symmetrical designs. As many as sixteen distinct bead colors have been observed on the Niagara floral style. Private collection. 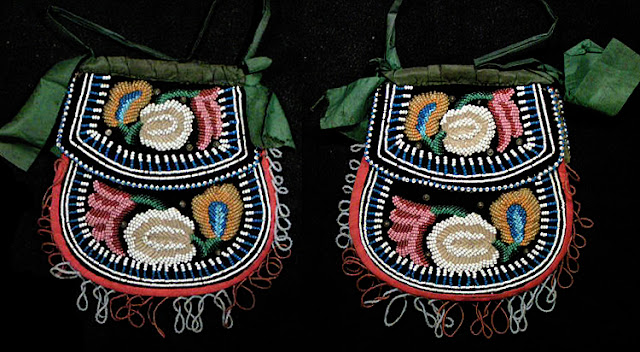 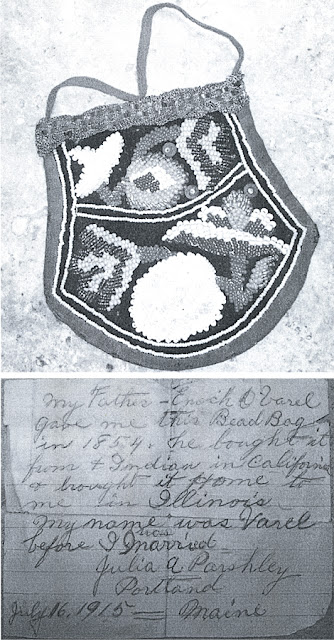 This particular bag appeared on eBay in the summer of 2010. It was accompanied by a note that read: "My father - Enoch O. Varel gave me this Bead Bag in 1854. He bought it from & Indian in California & brought it home to me in Illinois. My name was Varel before I was married.
Julia A Parshley, Portland, Maine - July 16, 1915."
Interesting to note that it was purchased in California in 1854. Makes you wonder if the Iroquois were traveling that far to sell their beadwork  An account published in the Rochester Union and Advertiser, November 12, 1859 mentions a group of  St. Regis Mohawks traveling through Rochester on their way to St. Louis and New Orleans with several large trunks of their beadwork which they planned to sell along the way. See: Made of Thunder, Made of Glass: American Indian Beadwork of the Northeast - 2006, page 9. 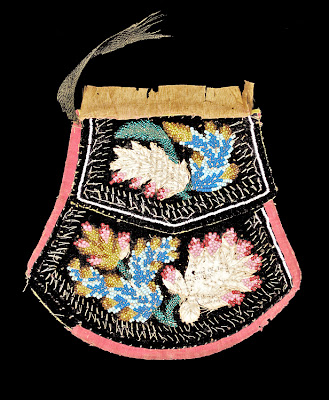 Beaded bag, Haudenosaunee type, late Niagara floral style. Glass beads, black velvet fabric, red cotton ribbon/hem tape edge binding and silk ribbon along the top opening. 7.5 inches high by 7.5 inches wide. Mid to late 1850s. This example has many missing beads revealing the paper patterns beneath them. An old newspaper was used to make the paper templates, upon which Tamaroa, Perry Co., Ill, December 27, 1855 is printed. By the mid-1850s, the ovate florals are evolving into elongated leaf-like clusters and the stems are noticeably attenuated. Private collection.


An old inscription inside this pair of Iroquois floral moccasins indicates that they were made by Indians in Madison, Wisconsin (Oneidas?) in 1856. Vast quantities of purses, hats and moccasins in the Niagara floral style were made and sold after 1845. In all likelihood, commercial motives influenced the rapid dispersion of the style to other Iroquois communities. This style is pervasive, and the extent to which it was admired by Victorian women no doubt fueled the dissemination of the style throughout the region. Attributed pieces in both private and museum collections indicate that were made in every Iroquois community. Private collection. 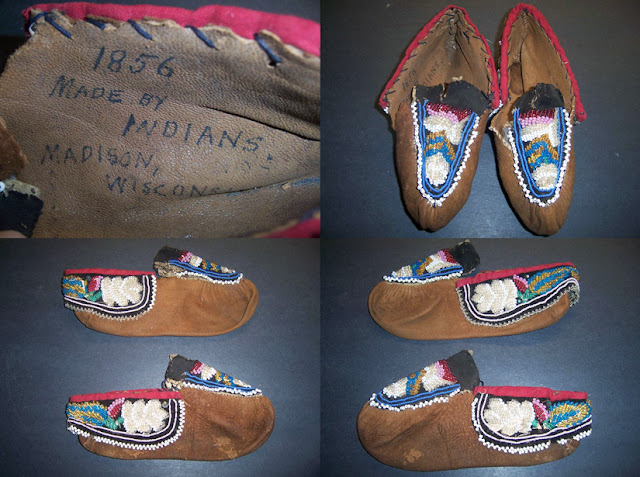 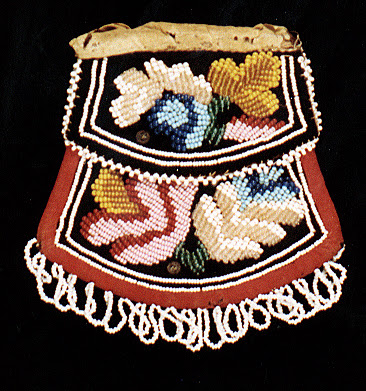 A note inside the bag reads: “Given to Mary Thayer Sanford when she was five years old – 1858.” The reverse side of the bag is virtually identical. From the collection of the Rochester Museum and Science Center, # AE7203.

A note found with the following bag reads: “This bead bag was given to Harriet J. Auable (sp?) in 1859 on the death of her ‘Aunt Hattie.’” Private collection. 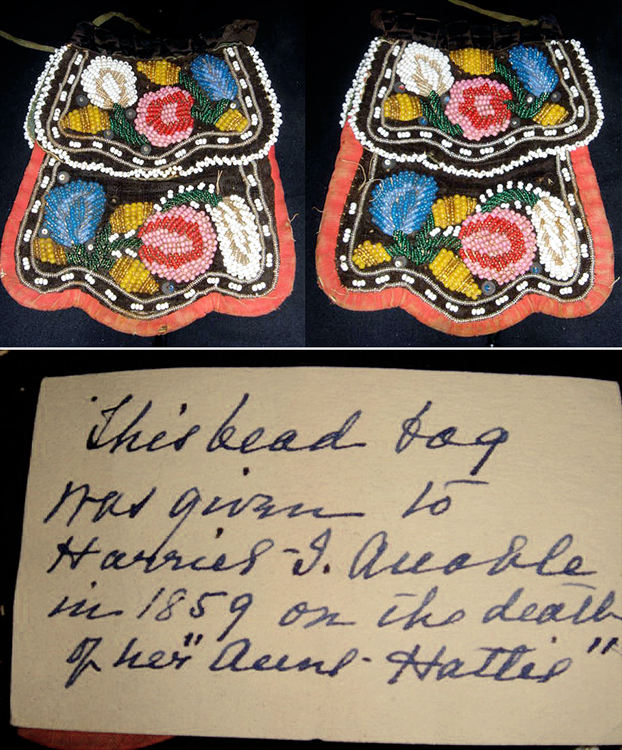 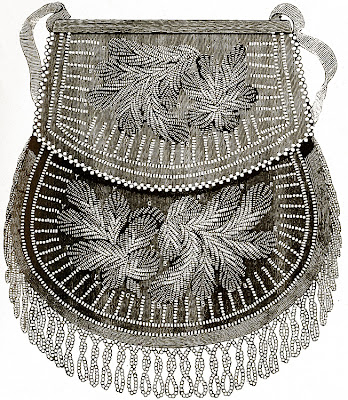 This illustration of an Iroquois floral bag with elongated leaf clusters in the Niagara style appeared in the British publication “The Ladies Newspaper,” April 2, 1859 and was accompanied with detailed instructions for making it. Many bags in this style are found in collections today and it’s quite likely that not all of them are Indian made. Photo: Library of Congress, Washington, DC and published in Trading Identities by art historian Ruth Phillips, figure 6-18.

Another example of a bag with elongated leaf clusters can be seen in this stereo view titled “Yankee Notions” by British photographer William England, of the London Stereoscopic Company, 1859. A Niagara floral-style beaded bag is displayed on the right side of the image. This view was taken by England while he was at Niagara Falls which indicates that this style of beadwork was not only available there but also representative, in the mind of this traveler, of items that were typically associated with this natural wonder of the world and iconic tourist destination. There is also a large beaded pillow/pincushion as well as a birch bark tray decorated in moose hair and two model canoes; one is decorated with porcupine quills, the other in moose hair. This image displays the diversity of Indian work that was being sold at the Falls by the end of the 1850s.  Private collection. 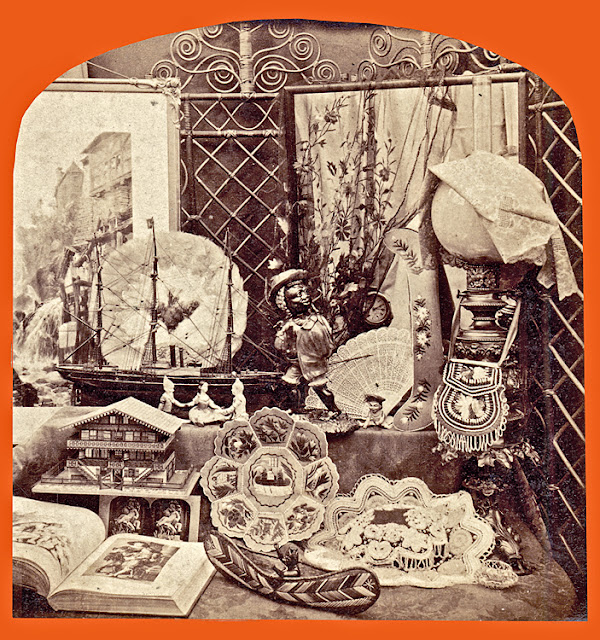 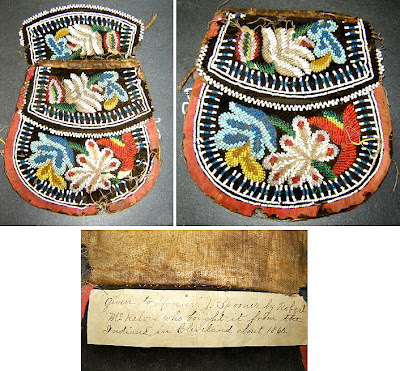 One more similar bag with elongated leaf clusters can be seen in this image. An old note sewn beneath the flap of this floral bag reads: “Given to Hannah J. Spooner by Robert McKelvey who bought it from the Indians in Cleveland about 1860.” Private collection.


Pincushion, Haudenosaunee type. Circa 1850. An early pincushion with paper patterns beneath the central floral design. The inked inscription on the back reads: “Bought at the Bath House on Bath Island, Falls of Niagara, Sept. 27, 1850.” There is also a name after the date but it’s illegible. Bath Island was one of several islands in the Goat Island complex. To gain access to Goat Island a visitor would first have cross Bath Island and  pay a 25 cent admittance fee at the toll house before proceeding to Goat Island. There was a concession at the Bath Island Toll House that sold fancy Indian beadwork to area visitors which is likely where this item was purchased. The pincushion illustrated here was possibly made by Caroline Parker or her mother as a near identical example is illustrated in Lewis Henry Morgan’s Fifth Regents Report to the state of New York, January 22, 1851. Caroline and her mother Elizabeth produced the majority of beadwork for Morgan and their work was illustrated in several of Morgans reports to the State of New York. See: Tooker 1994: Fifth Regents Report, Plate 19 for a near identical example. Private collection. 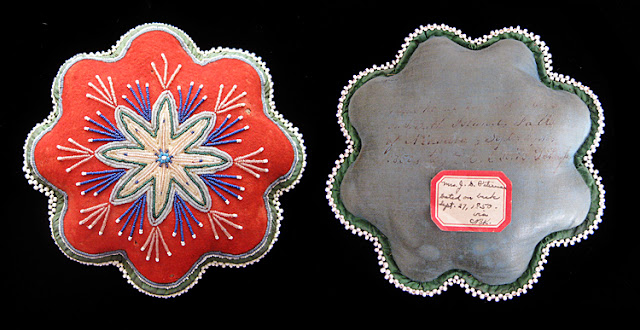 This next piece is from the collection of the Royal Ontario Museum (ROM) in Toronto, item number 987.261.29. I thank Stacey Loyer for bringing it to my attention.  A number of us spent a fair amount of time trying to decipher the text on the back of the pincushion. It was collected on Goat Island so it is possibly Tuscarora. The best guess on the inscription is as follows: "Purchased by [possibly Mrs. Michelson, Jr.] from an Indian girl on Goat Island, Niagara Falls, & can therefore be documented genuine Indian made. 9 June 1854 - Friday" 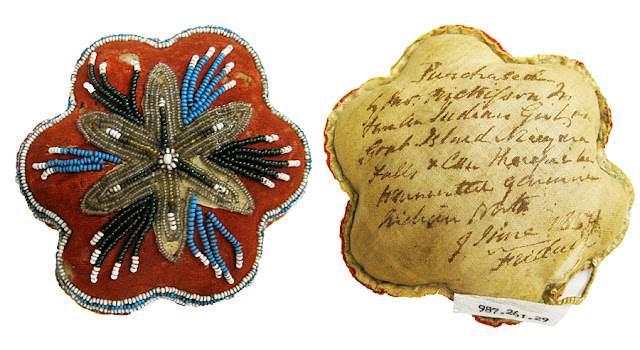 
Detail view of the inscription. 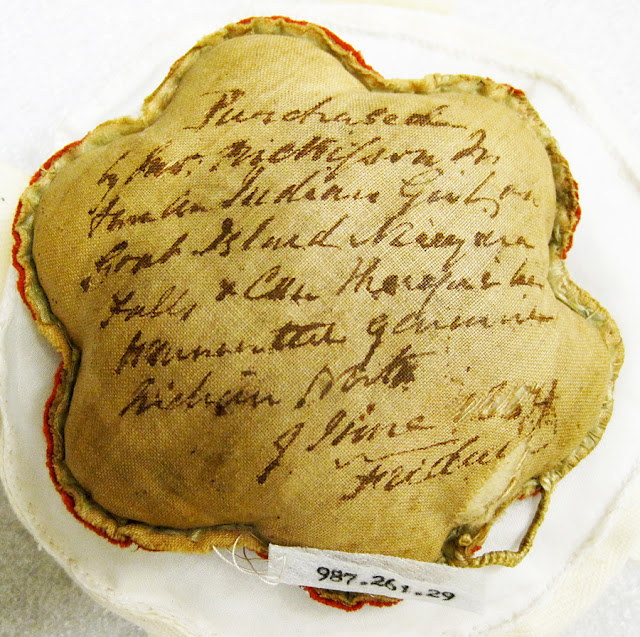 The small Iroquois purse below, possibly Seneca or Tuscarora, was found with an old tag inside that reads:
"1852 August, I Bought in Buffalo - M. Sears.” 3 ½ x 3 ¾ inches. Private collection. 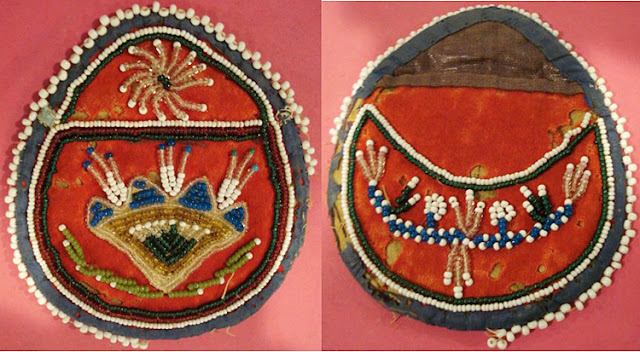 The beautiful Tuscarora sewing wallet pictured below is completely decorated in crystal beads. There is a stamp on the inside that reads: “A Present from Niagara Falls 1860.” I suspect the Tuscarora were not rubber stamping inscriptions on their creations which suggest that this piece may have been sold in one of the many souvenir shops that were popular at the Falls during this period and the stamp may have been added by the shop that sold it. If anyone has information to either support or contradict this please let me know. Private collection. 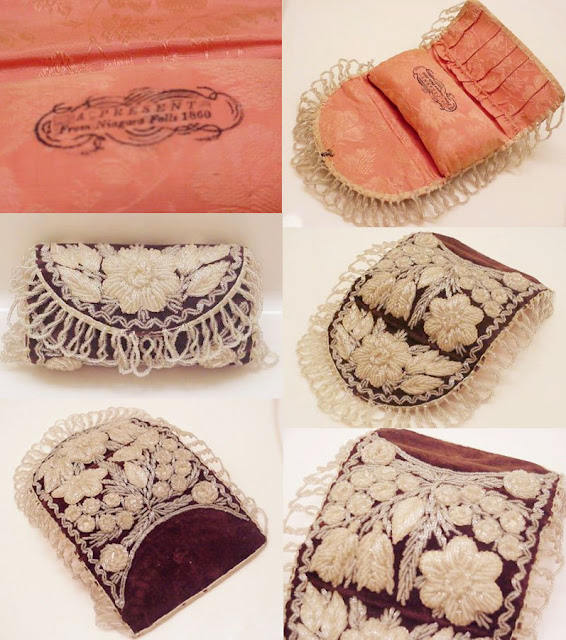 One panel from a stereo view that illustrates several moose hair decorated items. The large bag in the center is likely Huron. Also illustrated are some beaded bags, pincushions and other items of fancy Iroquois beadwork. The beaded wallet on the lower left side of the table has “Present From Niagara Falls” stitched on it in beads. Another early item with a beaded inscription. No photographer or location indicated on the stereo card though likely from Niagara Falls. Circa 1860. Private collection. 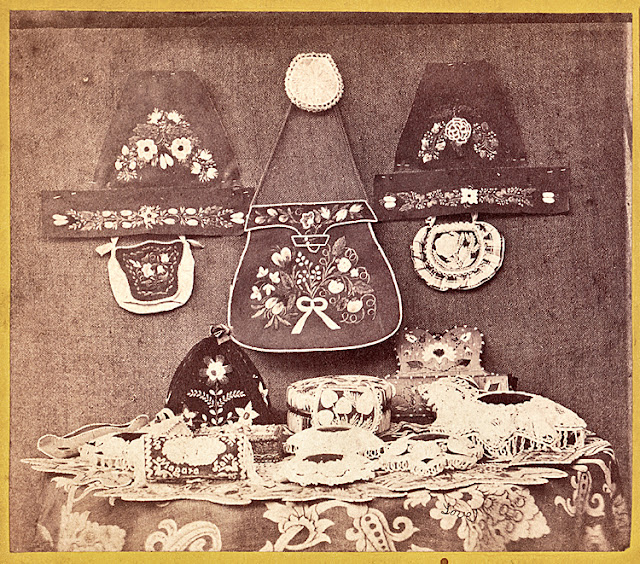 Beaded sewing wallet. Tuscarora. This piece sold on eBay recently. It is one of the earliest dated pieces of Iroquois fancy beadwork that I have seen. Very similar to the wallet in the previous stereoview. The beaded inscription reads “Present From Niagara Falls,” and it’s dated 1862. Private collection.


Posted by Iroquois and Wabanaki Beadwork at 4:35 PM