The Iroquois and Wild West Shows

http://www.gerrybiron.com/
The nineteenth century was the heyday for patent medicines and the countryside was replete with peddlers hawking remedies that claimed to cure everything from consumption to hair loss.  In an effort to attract crowds and spur interest in the languishing sales of their products, travelling salesmen began providing entertainments with their presentations. These so called “medicine shows” were prevalent after the Civil War and there were literally hundreds of them touring about the country in the last quarter of the nineteenth century.
Performing in these events often required that the enactors look like Indians. The perception of authenticity played a large role in merchandising their wares, as many popular products had indigenous or Native American sounding names.  Products such as Allen’s Indian Blood Corrector, Dr. Seneca Gall Remedy, Dr. Roger’s Indian Fever Cure, Aztec Pile Cure and Dr. Kilmer’s Indian Cough Cure Consumption Oil claimed to ameliorate cancer, syphilis, kidney disease and a host of other ailments. These were just a few of the thousands of remedies that were offered for sale with names that implied they were an indigenous cure for practically every ailment known to man. In addition to those that were sold by the solitary travelling salesmen, enterprises such as the Kickapoo Indian Medicine Company, based for a time in New Haven, Connecticut, chose a different approach to selling. They took the medicine shows to another level by including Native performers who were paid, on average, $30 a month for their services. At one time they had as many as 300 Indians employed who toured the country demonstrating Indian life and selling the company’s patent medicines.
The Mohawks travelled extensively in the nineteenth century, performing not only in medicine shows, but in circuses, theatrical groups and especially in Wild West shows. Mohawk participation in the entertainment industry is a proud part of their historical narrative.
Texas Jack Omohundro’s Wild West Show recruited most of their Indian entertainers from the Mohawk reserve at Kahnawake, near Montreal. Many of them were photographed in their regalia as they toured the country. These images are quite scarce and are a valuable aid in research.
An 1892 census for the state of New York listed 20 Mohawks from Akwesasne as travelling show men (Donaldson 1892:51) and there were likely many more from Kahnawake, in Canada, who were not included in the New York census. The many Mohawk cabinet cards from this period were no doubt of individuals who were involved in these Wild West shows.
Four of the cabinet cards below are of the same group, presumable Mohawks as two of the cards have a pencil inscription on the back indicating such. One is dated March 14, 1892. 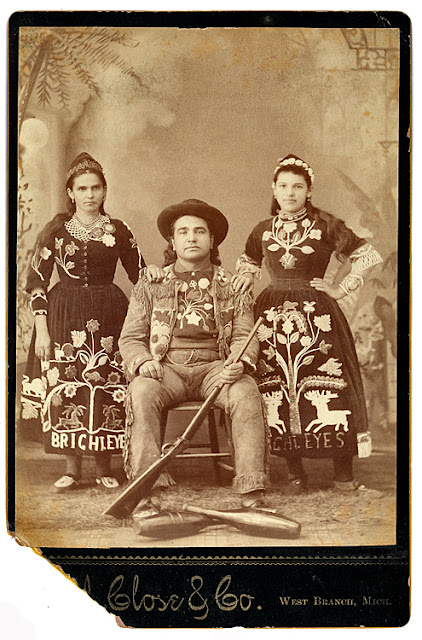 1890s cabinet card of a group of Mohawks. Photographer: Close & Co., West Branch, Michigan. The text along the bottom of the dresses says "Bright Eyes," possibly the name of this entertainment group. 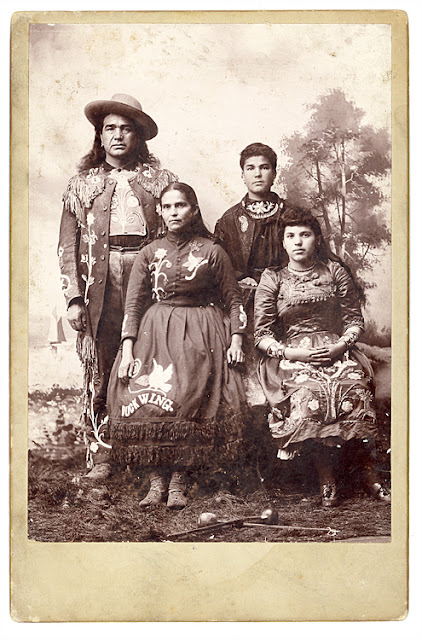 1890s cabinet card of a group of Mohawks. Photographer: Smith's Art Studio, Zanesville, Ohio. Identified on the back as Mohawks. The text on the womans dress says "Duck Wing." 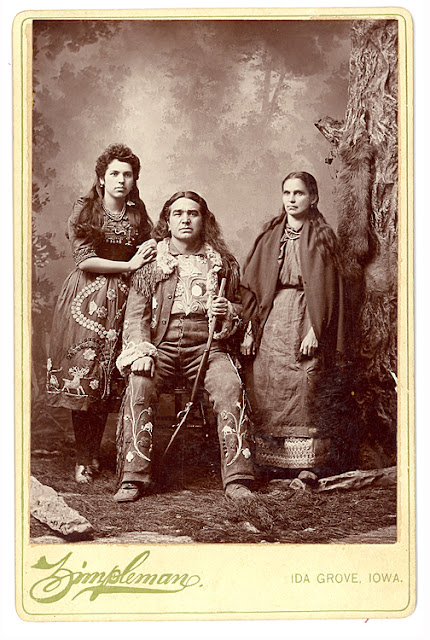 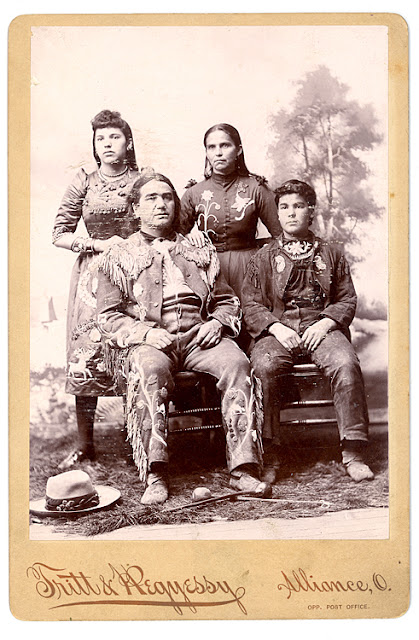 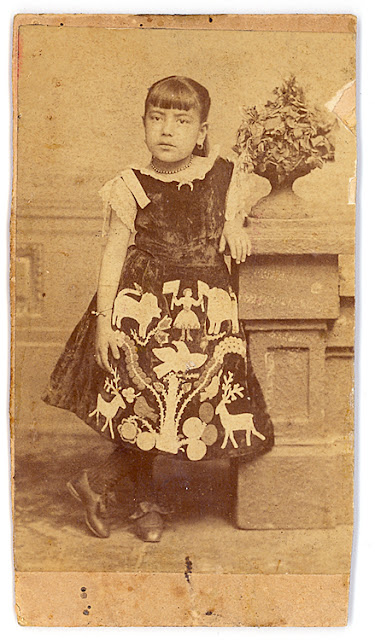 1890s carte-de-visite of a young Mohawk girl. The designs on her dress are remarkably similar to those on the cabinet cards above. 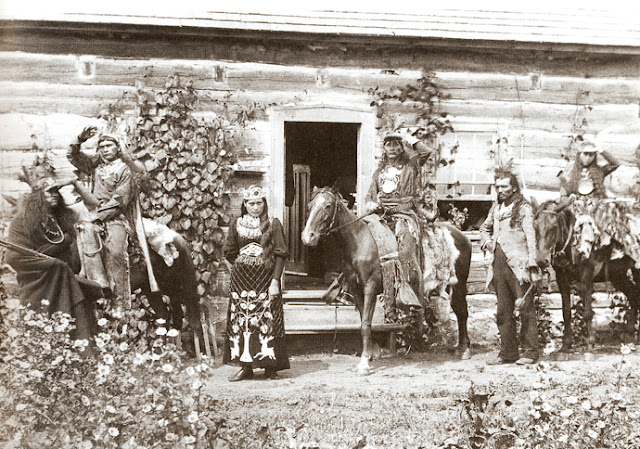 This image, from the Library of Congress collection, was illustrated in Trading Identities by art historian Ruth Phillips (Phillips 1998:15 figure 1.8).  She writes that this group was part of the St. Regis [Mohawk] Indian Show Company that travelled to Lawrence, Kansas in 1894. The members are identified as Black Eagle, Jake Paul, Mary Ann Black Eagle, Chief Running Deer, Philip Big Tree, and Lily Deer. She says the prominent tree of life on the woman’s skirt “pictures and preserves a key symbol of Iroquois cosmology and oral tradition.” The dress styles on the cabinet cards above are remarkably similar to the one in this image and suggest that they may also be Akwesasne (St. Regis) Mohawks.
References Cited
Donaldson, Thomas
1892    The Six Nations of New York – Cayugas, Mohawks (Saint Regis), Oneidas, Onondagas, Senecas, Tuscaroras. Eleventh Census of the United States. Robert P. Porter, Superintendent. Extra Census Bulletin. Indians. Washington, D.C. United States Census Printing Office.
Phillips, Ruth
1998    Trading Identities: The Souvenir in Native North American Art from the Northeast, 1700 – 1900. University of Washington Press, Seattle and London: McGill-Queen’s University Press, Montreal and Kingston.
Posted by Iroquois and Wabanaki Beadwork at 12:49 PM